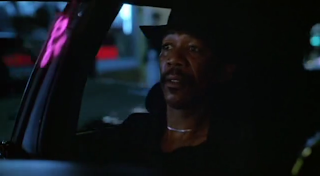 Street Smart tells a needlessly contrived story about a magazine writer (Christopher Reeve) who makes up a interview with a pimp, but finds himself in trouble when the world's dumbest assistant district attorney thinks the writer was referring to a real life pimp Fast Black who is on trial for murder.

The film has some serious problems in terms of its story as well as because of Christopher Reeve's performance who as an actor always seemed a bit lost when he was not wearing a Superman costume. Also the whole world of the writer who instantly becomes a star, and a television reporter from a single magazine story never feels like it has any sort of credibility luckily though Morgan Freeman as the pimp on trial for murder does manage to create the wanted credibility with the darker side of the film.

What works so well about Freeman's performance is his ability to portray the unpredictability found in Fast Black. Freeman shows a full person with Fast Black and he never portrays him for a moment as a one dimensional sort of pimp, as it would have been very easy to do. Freeman never keeps Fast one way in a single scene and the way he can change his behavior or attitude so suddenly is what makes this such an effective turn by Freeman.

Freeman so well is able to realize the different aspects of Fast and still able to keep him as one single man. Freeman does have an odd degree of charm and charisma in the role. It might seem a bit odd really for a character like his to be charming in any sort of way, but Freeeman makes it work surprisingly enough. There is a jovial quality about Fast that Freeman brings showing that Fast Black most certainly likes being Fast Black.

Freeman is brilliantly disconcerting though through how chilling he is in his extremely brutal moments of abuse and cruelty. He has an overwhelming presence in these scenes that makes him completely control them. He is particular frightening though because of this fact. Scenes like these are easy to overact but Freeman is always brutally honest portrayal of Fast Black.

I think in particular his strongest scene is when he tells one of his hookers that he is going to cut out one of her eyes and that she merely must pick.  Freeman is absolutely chilling in this scene because he is so matter of fact about the whole affair, as well as the fact that he makes it believable that the prostitute would eventually choose an eye simply by his violent presence.

Although this is not a good film at all even making it so that Freeman's is not given a final scene deserving of his terrific performance.  Nonetheless though this is still a terrific performance that fully realizes his frightening character without ever running into any of the cliches that usually comes with this sort of character. It is a great  characterization that most certainly deserved a better film to go around it.

Recently got this, wow Freeman was scary as hell =D

He's terrific in this.

I'll have to rewatch this, it may just be Freeman's year.

I'm shocked! But why not? I haven't seen him.