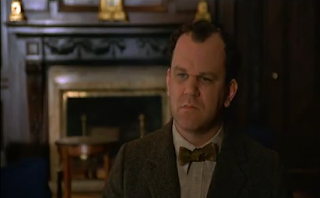 Chicago is a musical tells of the trial and fame of a murderess Roxie Hart (Renee Zellweger).

John C. Reilly who also was in The Hours, and Gangs of New York both Best Picture nominees was nominated himself with the Best Picture winner Chicago. Reilly plays Amos Hart the husband of adulteress Roxie who basically acts as a unknowing sap used by Roxie and her slimy lawyer Billy Flynn (Richard Gere) to their ends only. Amos basically just follows along doing exactly what they tell him to do, or manipulate him to do.

Reilly gives an appropriate performance in turn as a sap. He shows that there really is nothing special about Amos, and he really is not to bright. Reilly is mostly just required to look surprised and very modest. A character like this really is not suppose to standout all that much, and Reilly portrays Amos just as he should be. This means that although Reilly performance is not amazing as Amos his performance is instead just as Amos should be.

There is an exception to the rest of his performance where he does standout which is with his single song Mr. Cellophane. Reilly is front and center during the song and does make the most of it. He sings the song technically well, but more importantly he brings out the emotions of song strongly. He brings the heart and soul of Amos into the scene of the real pain of being Mr. Cellophane, and I am sure it is this scene that got him the nomination.

After that scene though it is just the same old Amos and the scene stands alone to show more of Amos than just the sap represented by the rest of the film. Reilly though gives a suitable performance throughout that is not asking much of him, but the Mr. Cellophane scene is very well handled as well as indicates that if more was asked of Reilly he probably would have brought more.

I basically agree, the nom is not that worthy, but I'm biased because I love the movie!

I also like Chicago. I can't deny that I enjoyed the film so much. But we have to talk about Reilly's Amos. Yes, I agree that his Mr. Cellophane scene was fantastic and that's all for his performance other than that he was overshadowed by his fellow actors.

I hate the movie but he and Queen Latifah were just fine.

I thiink it is one of the most overrrated films ever zellweger's fine but zeta jones steals the film even thought there's not much to steal.