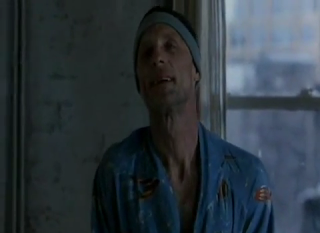 The Hours details three troubled episodes in the lives of three women from different time periods.

Ed Harris plays the aids stricken gay but former boyfriend now friend of the the now lesbian Clarissa (Meryl Streep). Ed Harris' performance is the type that just screams for an Oscar he is playing a gay dying character who is also crazed and even suicidal. Although I suppose a performance even when way to baity can still be good, but this is not the case of Ed Harris' performance, who wants to brilliantly play against type but instead plays the part way over the top.

Harris' performance is basically made up of just two scenes where he gets to act loudly toward the screen making sure the audience knows he playing a troubled dramatic suicidal man. He does this with so many dramatic line reading and even the way he sits and moves around suggests that he just wants to make sure everyone sees how much acting he is doing in the part.

Harris takes every moment of his performance to use an obvious voice to suggest that Richard is gay, poet and sick all at once. It far too much overacting from Harris who adds to his too calculated of a voice with some equally actory and over the top faces to add to his needlessly overblown performance. Harris could have toned down just a little any facet of his performance but always stays way far too over the top to be believable.

Harris wants to give an impassioned powerful performance that wants to be a heartbreaking portrait of this poet. For me though he fails completely because he insists on giving such a knowing performance. He never for a moment is able to bring an actual emotion because of his portrayal. His needlessly overdone performance becomes cringe worthy unfortunately. He never for a moment brings genuine emotion because of this despite how desperately he wants it to seem an emotional powerhouse of a performance.

he was the worst thing about the film I feel,he certainly comes closer to Tom Hanks (oscar bait) in Philadelphia than William Hurt in Kiss Of The Spider Woman (human character)

The whole movie just didn't do it for me.

Oh, this is the first time, you made me angry. :D If you say, that Ed HHarris was overacting, I´m really interested, what are you gonna say about Chris Cooper, which was overacting much much more, than Harris. But it´s your opinion, of course. I just love The Hours and especially Harris´s performance.
Could you please answer me one question? Why is better Paul Newman´s performance, that is so terribly down-the-line, that you can hardly notice his great performance better, than Harris´s showy acting you just have to notice, even though it´s so small role?

Ugh horrible performance. Though I do agree with moviefilm, that you could see Cooper 'acting' just as much, I don't think it was overacting as such but you could defiantely see the effort that went into it

Moviefilm: I noticed Paul Newman's subtle performance because of his brilliantly drawn characterization. Although quiet I was brought into his character by Newman pitch perfect portrayal. Harris on the other hand I only noticed because of how over the top he was with his far too obviously mannered performance. Yes a performance can be loud and utilize mannerisms, but it must be done with more skill than Harris uses here.

Louis Morgan: I think, every actor should do his best and I think, Newman has so many abilities to make his character more noticeable and he just didn´t use them. But there is a tragedy, a heart and love in Harris´s performance in my opinion. But I´m not trying to persuade you about my truth. I just wanted to know, what about Newman´s performance was better, than Harris´s. Though I disagree with something, I don´t want to blow your opinion away. :)

I have to rewatch the 2002 supp actors but from what i remember stephen dillane was better as virginia woolf's husabnd in the hours but got no traction 'cos he is not a name!.

Sometimes subtle acing can be just as strong and noticeable as loud,look at me acting @moviefilm.

mrripley: I agree, subtle acting really can be as strong and noticeable, as loud acting, but it definitely is not the case of Newman or Walken (in Catch me, if you can). And BTW, I´m not actually some huge fan of loud or over- acting. Chris Cooper is Adaptation is not a performance I like somehow...

Well, I feel like dropping in and reminding everyone that acting, more than a lot of things, is almost purely subjective. The other day, I was watching "On the Waterfront" with a friend, and after it was done, I asked him what he thought. He told me Terry was boring, Karl Malden was ridiculous, Lee J. Cobb was over the top, and that Rod Steiger was pretty good. so, yeah.