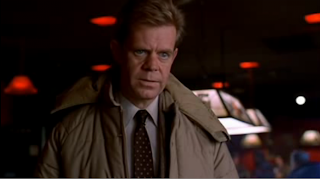 Fargo depicts a scheme of a used car salesman to have his own wife kidnapped to receive money from his father in law, but things get out of hand very quickly.

William H. Macy really is not at all supporting in this film and is indeed the lead of the film. After all it is Jerry's plan that sets everything in motion in the film. I imagine he was placed was Macy is a character actor not a leading man as well as the fact that he plays a real weasel of a character. Everything that Jerry really is doing in the film is completely for his own personal gain, and he does it all in a very modest and incredibly pathetic fashion.

Macy really is just perfect in the role of Jerry Lundergaard, and is great casting because Macy usually comes across as some sort of likable any man. There is nothing special about Lundergaard except for his ability to go ahead with is not so foolproof plan. Macy is great because he never tries to hide the modest and downright pathetic nature of his character, instead he flaunts it fully in his performance.

Macy completely makes the most out of the pathetic Jerry. He makes him into an actual person from this place, who really just has no idea what he is getting himself into. It is a very effective portrayal though because although Jerry really is the villain of the film Macy never plays him as such. He shows him just to really be a  man with a very very bad idea, not some sort of evil mastermind. Macy managed to handle this so well, I never really hated him in this, but more just felt sorry for him.

Macy though never for a moment though never brings to life the lowlife elements with just the normal man elements. He particularly does this well in his scene at the car dealership he works at where he is ripping a man off over a car. Macy shows that there is no regret for what he is doing, there is certainly a regret there but only for being caught in the act. Macy is just great in the way he tries to talk out of everything with just basically nonsensical back talk. He shows that this is just a normal routine that comes easy to Jerry, although that does not mean he really is good at it either.

What I love about this performance is Macy pitch perfect way he shows Jerry completely unable to handle the results of his own plan. The problems in the plan get to Jerry instantly so that he can barely even understand that his plan could have such negative effects. From the first problem Macy shows that Jerry is completely nervous and unable to deal with what has happened, because he is not only not a mastermind but completely not cut out for this sort of thing.

Macy's performance never falters once. He gets everything right about Jerry from his appropriately modest sounding Minnesota accent, to his awkward pauses in his speech, his increasingly nervous demeanor, and just his sheer inability to do really anything right. Macy manages to give an entertaining, enjoyable, and effective portrait of the very pathetic man. There is not a single missed opportunity in his terrific performance.

Oh, he's so fantastic. So is the movie. I love everything about it. Frances McDormand is a bit better for me but Macy is fantastic, too.

Who else would you nominate from the movie? I'd give a nod to Steve Buscemi, too.

Buscemi would have been deserving of a nomination, and I liked Peter Stormare as well.

The only thing wrong with Macy's nomination is that he shoud have been lead. I agree that Steve Buscemi could have been nominated as supporting actor instead of Cuba Gooding.

Wonderful performance, absolutely terrific! He's so pathetic, I had a hard time watching him.