Best Supporting Actor 1988: Martin Landau in Tucker: The Man and His Dream

Martin Landau received his first Oscar nomination for portraying Abe Karatz in Tucker: The Man and His Dream. 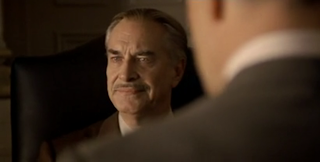 Tucker: The Man and His Dreams depicts the efforts of Preston Tucker (Jeff Bridges) to bring to life his pioneering car design despite severe opposition from the big three Automobile producers.

Martin Landau plays a businessman Abe Karatz who is the first person of business to hear about Tucker's specific idea. Landau does a good job of just establishing the type of man Abe Karatz is simply through the way he walks and talks. Landau shows just from an always slightly harried look, and a tired walk that Karatz has frankly been through some bad buisness deals. Landau though shows not so many that he has given up his pursuit of money, but Landau shows in his whole body language that Abe is a business man through and through.

Martin Landau actually for a good amount of the film does not get to do very much other than talk about business and be aghast at some of Tucker's more flamboyant actions. There are certain moments though which shows Abe's slowly growing more attached to Tucker and his family, as well as Tucker's idea. Although for most of the film it is not given much time, but Landau is effective as he slowly shows Abe warm up to Tucker and his group quite effectively without it seeming at all forced.

Landau's most important scenes though come at the end of the film where Tucker faces some serious troubles when he is being prosecuted for fraud, and Abe reveals that he had earlier served time for bank fraud. Landau is great in his two key scenes one where he tells Tucker how he has grown to truly believe in Tuckers dream, which is effectively moving becuase Landau shows that this is first thing Abe has really ever believed in a very long time.

Landau's other most important moment comes from his single scene where he is testifying at the trial. Landau's performance is just great when Abe is asked if he expects anyone to believe him, and he says in reply "one". Landau in this moment shows an honest portrayal of friendship with Tucker as well as an earnest belief in Tucker himself. Although Landau never quite is amazing, and his part is sometimes limited he gives an effective performance that adds well to his film.

Good performance, but his best roles were yet to come!