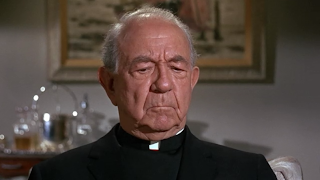 Cecil Kellaway is charming and nice enough in his performance. He is exactly the kindly priest that he should be. When he later questions Tracy's character he again is believable in his somewhat sarcastic way he confronts him is done in an appropriately playful fashion by Kellaway. After this though there really is nothing special about his work, but at the same time there is nothing wrong with his work either. In fact it is just as it should be possibly just a little more, but certainly no less.

Kellaway does not really standout in any substantial fashion in the film, but nor is he excessively forgettable either. He is just a nice little presence in the film because of Kellaway's natural charm, I suppose Monsignor could have been less by not having the charm Kellaway has but still the performance never becomes anything that needed to be rewarded or even noted.

I agree here, nothing to special.


What did you think of the other actors?

Hepburn is fine but not win deserving. Poitier is good as usual. Houghton is almost excruciating. Beah Richards frankly tries to be too dramatic. Roy E. Glenn is fine, and basically almost all of the small side roles are overacted in some way.

What do you think of Kellaway in Sweet Charlotte? Have you seen it?

I have not watched that.

this is a bit off topic but my boyfriend is planning on buying me a Terence Stamp film for christmas among other things, are there any films besides Billy Budd and The Collector that he is good in, any ideas bloggers so I can hopefully give him a clue xxxxx

I don't have any other good recommendations for Stamp becuase I have not seen that much of his work on a whole, although I do love the way he says "KNEEL" in Superman 2.

Not that great IMO. The weakest link for me.