Thomas Gomez received his only Oscar nomination for portraying Pancho in Ride the Pink Horse. 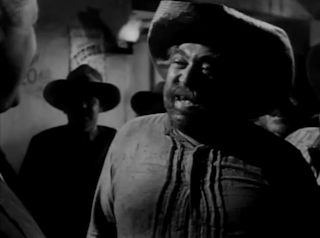 Ride the Pink Horse tells of an ex American GI Lucky Gagin (Robert Montgomery) who goes down to a New Mexico border town to seek revenge against a crime boss who killed his friend.

Thomas Gomez plays one of the Mexicans in the border town who runs the local carousel, and befriends Gagin, after he convinces Gagin to buy several locals drinks because the bar did not have enough change for Gagin's ten dollar bill. Thomas Gomez actually gives a very nice performance as Pancho who eventually saves Gagin despite being threatened physically himself. Although really this could have been a role that could have only been stereotype or two dimensional but Gomez makes an honest character out of Pancho even with the little time he is given.

He adds a much needed bright face to the film that tries to bring some joy to the whole proceedings. Gomez does not make Pancho for a second some sort of forced comic relief though, instead Gomez makes Pancho a joyful fellow that naturally brings a lighter element to the film. He actually has good chemistry with Robert Montgomery and the two have a nice dynamic with Montgomery being rather serious and to the point, and Gomez being far more relaxed who would rather take his time with things.

Thomas Gomez is always a good presence in the film and only adds to basically the color of the film. He is particularly good when his loyalty to Gagin is challenged by thugs. Gomez is very good in this scene giving a realistic portrayal of loyalty Pancho has for his friend, and the scene is rather hard one to watch as Pancho is beaten because Gomez is just so likable as Pancho. Although this is not an overly complex character, Gomez only ever works to add to his the film with easy charm and joyful character.

When I looked at the picture, I thought he would be horrible and you would hate him so I'm quite surprised, actually.