Best Actor 1939: Clark Gable in Gone With the Wind

Clark Gable received his third and final Oscar nomination for portraying Rhett Butler in Gone With The Wind. 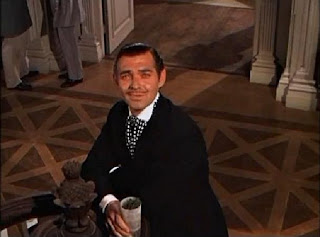 Gone With The Wind is an incredibly strong epic. It is a long movie, that is actually worth watching the whole. It has a few problems but overall it really is a truly great and grandiose film experience.

Clark Gable just is Rhett Butler, and Rhett is Gable. As soon as he appears, he is the character there is no doubt, he just simply is the part. Everything about him only ever insures him as Rhett Butler. I never for a moment in the film questioned him in the part which aided the making his performance as a truly iconic one. His performance as Rhett is one that is essential to the film, and Gable is a character of great impact of the film. This all begins with his initial entrance at the bottom of the stair case looking up at Scarlett (Vivien Leigh). His single look here begins the ease of performance Gable has with this performance. He says nothing but Gable has already suggested more than enough of Butler. Gable look is absolutely perfect there is no question to that look it is as Scarlett describes it, being able to see through her clothes.

For about a third of the film Rhett really does not continuously appear in scenes in comes in and out of the film. Every time though he appears he certainly makes a strong impact, this partially in the way Rhett is written but more fully due to Gable incredibly powerful presence. Gable's presence here is like none other, his natural charisma and strength are never more visible and as strong than as Rhett. Every single moment Gable is on screen his personality is simply magnetic. He always stands out in a scene and always a perfect command in them. Such as his first scene where he questions the abilities of the southern gentlemen to win against the North. He shows Rhett is a man who always has command over his situation. He makes Rhett into a man who knows what he wants and how to get it, and a man who shall not be forgotten, and is not forgotten ever in the film.

Now the most important factor of his performance though that really makes it legendary are his scenes with Vivien Leigh. Vivien Leigh's performance is an astounding performance, one of true brilliance, and Gable being able to stand up along with Leigh performance is a true feat there. Both of the two work wonderfully together. They both are completely in tune with their characters and in each other to make their scenes together scenes of cinematic greatness. I really like Gable way of dealing with Leigh and the way she deals back toward him. They simply could not be better, and both are absolutely brilliantly in showing these two characters who sees things the way they are even if they are of low character at times. They are fantastic in the way they tear at each other down to their true selves. These "romantic" scenes together are fascinating because they really are not tender, but in many ways harsh, yet they still hold tremendous power, because of Leigh and Gable are truly great together.

Gable finally consistently appears in the final fourth of the film, after Rhett marries Scarlett. Gable got along perfectly before that point, excelling as Rhett, while Rhett was always able to stay away partially and never truly become involved with the troublesome Scarlet. Rhett when he does become even more deeply involved with Scarlet including to having a daughter together, Rhett finds great troubles with this relationship, and this really puts Gable performance to the test. Gable is more than up to the task, though and gives truly emotionally honest portrayal as Rhett. He shows Rhett desire to love Scarlet but also his sadness and regret due to her inability to shake her own selfishness. Gable is simply perfect in all of these scenes, and especially the final scene where Scarlet goes to Ashley Wilkes (Leslie Howard) for the last time. His exit and final line delivery are mark of not only an iconic performance, but also of a truly great legendary performance.

Love Gone with the Wind. One of my all-time favorite films. Love Leigh, not quite sure how I feel about Gable though, but I agree that he is iconic.

Iconic and huge performance for sure, but I'm sure if Gable's that apt at playing/conveying the different facets of Rhett. With Gable, the role feels underdeveloped. He's almost flattening a great role on page, by simply whizzing by on his grand, smooth charisma. There are just missed opportunities to deepen the character beyond a toothy grin that become evident. Also, the performance isn't as emotionally textured as it should be, but it's to Leigh's credit that she can make the film completley work otherwise

I obviously must disagree. First of all no one but Gable has that toothy grin or his charisma, and I personally always saw Gable working with more than just his charisma with Rhett. To say Gable was just charisma as Rhett is an extreme oversimplification of his performance.

I agree - it simplifying it too much. The character of Rhett itself is a charm.

Anyways, one of my favorite nominees ever (unlike the last one).

I really don't think that's so. Yes, Sage, is correct he himself IS a charm, but that's all he is. Aside from a few emotionally dramatic moments, the character remains to hazy and not fully fleshed out -- maybe it's the nature of the character, but it didn't all fit for me a least.

Which actors would u consider gables contemporaries