Raj Kapoor did not receive an Oscar nomination for portraying Raj Raghunath in Awaara. 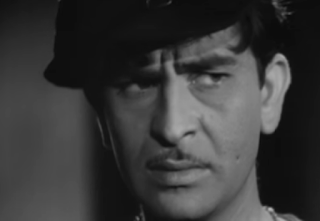 Awaara has a potentially interesting story through the trials of a young thief who is the disowned son of a wealthy judge. I'm here to give my opinion though so I have to admit the Bollywood musical scenes completely weighed the film down for me. It makes the pacing somewhat intolerable and every time they came in they completely broke the flow of the story.

Raj Kapoor, who also directed the film, plays our lead character, aptly named Raj as well, who we see through the phases of his life beginning in poverty. In order to support himself he turns to thievery. The film goes in phases essentially as Kapoor almost breaks down his performance into different acts of the film. The first phase being an almost comedic performance as he depicts Raj's attempts at thievery basically as a bit of buffoonery as he keeps get into unlikely situations because of it. As Raj runs into his old childhood friend Rita, who he keeps running into because he attempts to steal from her, accidentally. Again this is handled with more of a comedic effect than might be expected, but in a good way. Kapoor brings a real exuberance to his performance in these scenes in essentially crafting the likable thief who gets into more of hijinks than criminal activity. This includes Raj's efforts to cover his initially thievery of Rita's purse by pretending to have a fight with the "real" thief while out of sight. Kapoor is certainly entertaining as he throws himself into the scene quite literally at times, and manages to be rather charming in portraying this rather strange act.

Again his performance goes through phases, usually broken by one of the musical sequences to be honest, as it shifts to a more directly romantic turn with Nargis as Rita. Though perhaps the transition is a bit hidden by the songs, Kapoor nevertheless effectively becomes the next part of his performance as Raj. Kapoor changes to a more low key charm of sorts, something less active, in portraying a bit more of a humble quality within his interactions with Nargis. They certainly have the requisite chemistry between the two as the two convey well the underlying connection and warmth between the two. Unfortunately for old Raj and Rita this period of the film is short lived, although the underlying chemistry between the two is something that stays within Raj's changes. The next phase though comes as the film becomes a bit more serious minded in its portrayal of Raj's poverty, and that his past as a thief keeps from rising beyond his upbringing. Raj's mental state in this regard isn't exactly helped as he begins to discover the truth about his father, who happens to also be the benefactor of Rita.

This transitions to Kapoor's performance to more of his angry young man performance where he lashes out against society, which leads Raj eventually into criminal charges, and a trial which acts as a framing device for the story. Again Kapoor's performance actually works for what is required for him in this regard. It does not feel as jarring as it seem as it should, even though he loses the charm in favor of portraying the intense discontent in Raj that defines him. The switch is sudden yet given the story around him it manages to match it, and further Kapoor fulfills the need of the part. He is particularly good in this aspect as he portrays well the growing hatred in Raj, as his outrage continues to get the best of him. Within this portion of the film Kapoor makes the transition to an even more violent man natural. One more shift is left, which is the Raj we meet at the beginning of the film, which is more of a man who has given up on life ready to meet his apparently bleak fate despite the continued optimism of Rita who intends to save him. This is technically probably given the most neat of switches though as it feels like a believable enough end result of the angry young man. Kapoor though once again is good in portraying the simple depressed state of the man choking on his own misery, until his big dramatic speech at the end of the film. Kapoor delivers this with the right passion and he also carefully does not drop the state of Raj showing him still to be burdened by sadness. This whole performance is a rather interesting example of a director directing himself. The reason being Kapoor's performance certainly matches every tone the film happens to be going for at any given moment properly, though it is questionable whether all these varied tones are right for a naturally flowing film. I would say no, in that the film doesn't quite pull it off, despite Kapoor's best efforts as an actor. Now I also don't think in these various phases Kapoor is great in any of them, but he's good in all of them, which is worth something.

Well, thank god he was good enough to be reviewed :). What would your rating and thoughts be on Nargis and the rest of the film's cast>

I see a rant coming.

Anonymous: Charles. Though I hope he doesn't.

Nargis - 3(Her performance technically struggles with the tone a bit more mainly because she sticks to playing the part with a lighter touch fitting to the early scenes. She does this rather well unfortunately this does meld as well with the later scenes.)

Has anyone here head of a Danish film called Men and Chicken? Mads Mikkelsen's performance sounds...interesting, to say the least.

Matt: I have, though there's much of Mads' filmography that I need to see like the Pusher Films, Flame & Citron, Coco & Igor, Open Hearts, After The Wedding and Michael Kohlhaas.

Louis: Your cast and director for a 1950's version of the Last Picture Show.