Karl Malden did not receive an Oscar nomination for portraying General Omar N. Bradley in Patton. 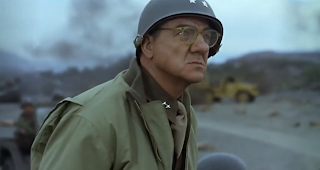 Patton is a film almost wholly involved with the story of General George Patton played by George C. Scott. The film's weakest aspects are when it attempts to diversify the story with the excessively simplistic German scenes that easily could have been removed from the film. There is only one supporting character who makes an impression on the film, Michael Bates might have with General Montgomery if he had not played him as such a caricature, that performance is of course Karl Malden as General Omar Bradley. The film carefully spotlights Bradley advancement as a General while following Patton, and in terms of the literal beginning of the story Malden actually appears before Scott does.

I always thought of Malden's performance as a good one but watching the film again for his performance the  only improved the strength of the work. This is readily apparent from his very first scene where he rides to see the end result of a battle in which the allies took heavy losses. Malden establishes the nature of Bradley very effective in the way he handles the scene. He barely says much of anything, but brilliantly portrays the reaction that Bradley has toward the tragic result of the situation. Malden expresses rightly the subtle way that Bradley is forced to suffer the sight. Malden shows that it definitely does move him to see so many of the men dead, but Malden correctly keeps it in the man of Omar Bradley who is must do his duty.

Omar Bradley is the opposite of George Patton in most ways other than that they are both competent. Patton is a loud passionate and very fierce man who does things his own way without even a question with others opinions on the matter. He is easy to find conflict and does seem to have some delusions of grandeur in his belief that he is the reincarnation of many a great warriors. Omar Bradley is nothing like that with an easy going nature, and a complete lack of glory seeking in his attitude. Malden successfully makes Bradley the perfect foil for Scott's Patton. Malden, like his Oscar winning turn, is great in playing unassuming roles. Malden is great because he does not mind being genuine in this regard, and instead of finding flamboyance where there shouldn't be, he brings out the complexities of such a man.

Malden is excellent in the role in bringing to life this man, who is in the war to do his job as efficiently as he thinks he can. Malden does not make Bradley a simple sort, as many may have, and just like Mitch Malden knows that just because a man is reserved does not make him dull. I should say Malden doesn't reprise Mitch here though as Malden has the right forceful presence necessary for a commander of man like Bradley, but Malden shows Bradley to man who carries this power in his personal determination. Malden makes Bradley a restrained man among the nature of Generals, and especially when compared to the overwhelming personality of George S. Patton. Bradley would be a man who is part of the room, Patton on the other hand insists on being the room.

The greatness of Malden's performance is in his chemistry with Scott's performance. Malden is quite fascinating in that he makes Bradley a proper right hand man at first who wants to work with Patton to fight against the Nazis, but Malden has certain hesitations suggested within Bradley kind supportive face. Although Malden goes along with Patton, but in Patton's most eccentric moments Malden hints at a certain coldness toward Patton. This is important as Bradley career takes off and Patton slowly becomes muddled in various controversies. When they meet again on less even ground Malden still keeps Bradley as mostly amiable, but when Patton goes too far Malden  reveals Bradley's side that openly distastes Patton prideful, and less professional side.

Karl Malden gives a great performance that complements Scott's main performance in a marvelous fashion. Although it is Scott's film of course, Malden is not to be forgotten through his fascinating depiction of Omar Bradley. Malden easily could have fallen into the rest of the supporting characters of the film that are forgotten as soon as they leave, or even before that. Malden, unlike the rest of the supporting cast, makes the most of his somewhat limited screen time. In his time he shows a honest depiction of a General who is passionate about his duty, but in heart is an ordinary man taking a down to earth attitude to this duty. He's extremely effective in finding the finer details of the man, especially in Bradley complex relationship to a man whose manner toward war is almost antithesis to his own.

A bit surprised, but happy with the rating, Patton is one of my favourite war films of all time and love the opening war speech by George C. Scott

Louis, will you be able to finish 1970 before the oscar nominations come out.

I believe I'll be able to.

What did you think of rush

I actually liked Rush well enough, but Howard's directing was as workmanlike as always.

As of now before thursday, who are your predictions to be nominated in both Male acting categories.

Ejiofor, McConaughey, Hanks, Dern, and Redford, although I am very tempted to say DiCaprio instead of Redford.

I'd rather have Dicaprio instead of dern, but ah well.

What are your thoughts on Darth Vader as a character & Villian in the Star Wars Original Trilogy.

I think DiCaprio's got a much better shot not that he won the Globe.

I REALLY hope someone takes Cooper's place. I don't care who it is.

Matt: I agree on cooper, He was all over the place, and the film itself was boring as **** to me

Matt: Who would you have instead of cooper.

Yeah I don't quite get the hype for American Hustle either. It's a solid 3 1/2 star out of 4 film, but nothing great, not even Lawrence, who I usually love. If Scorsese had directed it, then it would've been great.

I have to say I've always really liked Sebastian Shaw's one scene as Anakin Skywalker, and it is extremely disrespectful what they did to him in those remasters.

Luke: I haven't really seen many of the contenders for Supporting Actor, honestly.

What are your thoughts on Shia Labeouf recently.

I have not really been following it all that closely, but I never cared for him as an actor anyway.

Louis: when ever you see the hunt, can you rank Mads Mikkelson's performance in your 2012 ranking.

Louis: What is your rating and thoughts on Robert Patrick for Terminator 2: Judgment Day

4.5 as he brings the right efficiency to his portrayal of both the android's unemotional intensity as well as the false emotions it uses as camouflage at times.