Takashi Shimura did not receive an Oscar nomination for portraying Dr. Harada in I Live in Fear. 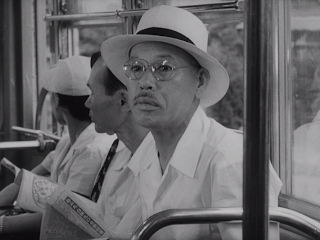 Akira Kurosawa's other frequent collaborator Takashi Shimura often played the wiser man to Toshiro Mifune's brasher individual, at least until the thankless roles Shimura was given in Kurosawa's later films, but there is perhaps a bit of a twist on that idea here. Shimura plays Dr. Harada who is almost a co-lead to Mifune's elderly Kiichi Nakajima who is spending his decedents inheritance to protect himself from a nuclear holocaust he views as inevitable. Dr. Harada acts as a Domestic court counselor, which means he basically decides the case against Nakajima, along with two other men. The film follows his story too, although Shimura is not given a substantial amount of screen time, and his story is always firmly connected to Nakajima's.

The twist on the usual dynamic found between Shimura and Mifune in the film is that Dr. Harada really does not know who exactly to take away from Nakajima's fears. Dr. Harada acts as the impartial observer throughout the film as he merely must witness the story play out and his only technical action that changes the course of the film is that he decides, along with the two other court officials, to remove Nakajima's ability to spend his own money. Dr. Harada is a very quiet character because of this as he personally investigates the situation and deeply ponders the complex situation. Dr. Harada is a reactionary man, and thankfully Shimura plays him who must be one of the greatest actors in terms of finding the power in the unsaid.

Shimura is very important to the film in structuring the film really as showing the one good man in the whole affair, as both Nakajima and his children are flawed. Shimura never once wastes his presence in the film in his performance that is able to convey the right confusion in terms of the situation. It is not a confusion as if that Dr. Harada does not understand the situation, but rather the confusion of not knowing truly to do react to it because Nakajima's fears do have basis but his method of running from society is far from a logical solution. Shimura finds the right place to put Harada in every scene in terms of both personal attachment but as well as the detachment of the observer. Shimura in a way is the stand in for the audience of the film who also must decipher the complex issue at the center of the film.

Shimura plays his part incredibly well by never overplaying his hand. He shows Harada as a man who connects with the Nakajima's plight but never allows it to overwhelm either. Shimura finds just the right tone with his performance to add to every scene but never try steal the attention wrongly in his direction. Harada simply is not the focus of the film, but Shimura amplifies the impact of every scene that he is in his portrayal of Harada very realistic and down to earth reactions. Shimura brings a true poignancy in his short moments in the film honestly showing the struggle in Harada. Shimura is moving because he finds the truth in his character as Harada is troubled by the case, but there is always that underlying idea that he just does not know exactly what to do either.

Akira Kurosawa had one of the greatest acting duos at his disposal in Toshiro Mifune and Takashi Shimura as shown in Stray Dog, Seven Samurai, and in this film. In this film Mifune's performance goes down an insane path which is fitting considering that Nakajima believes he has left the earth by the end of the film, Shimura does a terrific balancing act in his portrayal of the grounded Dr. Harada. Mifune's final scene is a powerful one on his own but Shimura adds so much though through his silent performance as Dr. Harada can only watch a man's full descent into madness. It is a great testament to Shimura's strength as an actor in summing up the finale of the film through his simple physical reaction that realizes the disheartening quality of the end, but as well the sense that there was no real solution to Nakajima's dilemma. Takashi Shimura's work here is memorable performance by being the soul of the picture in such an unassuming yet remarkable fashion.

I figured when you said in your review of Mifune that this film was "lesser Kurosawa" that no one would get a 5, so I gave someone else the win. This is pretty high praise for a 4.5 though, I still might be in trouble.

I'm also still hoping that Louis will watch a supporting performance in a 1994 film that is better than Gary Sinise because I just can't stand the idea of a 3-star performance being in a top 10 in any year after 1950 or 1960, much less 1994.

Off topic, but what films have you guys watched while on the break? I saw Frozen and American Hustle so far. LOVED Frozen to death, and I really enjoyed Hustle.

I saw The Hobbit at midnight premier and really enjoyed it, even though it had issues. I thought it was a definite improvement over the first, especially since it felt more cohesive.

I'm planning on seeing Hustle and Saving Mr. Banks at least. I'll try to get in and see Frozen but that's somewhat unlikely. I also really want to see Her, but I probably won't have a chance until wide release. Inside Llewyn Davis is a definite possibility.

I saw the Hobbit which I enjoyed a great deal, and Saving Mr. Banks which was better than I expected, not great by any means, but it did surprise me a little especially in terms of Tom Hanks's performance.

Wow, I was TOTALLY convinced he was miscast from the trailers. Now I have to see it.