Peter Sellers did not receive an Oscar nomination for portraying Harry Robinson in The Ladykillers. 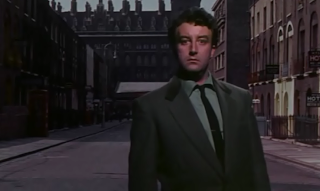 The entire cast of The Ladykillers is uniformly solid and all of the actors playing the robbers posing as musicians are worth mentioning. There is Alec Guinness as the ghoulish Professor Marcus of course, the usually dull Cecil Parker is rather winning here as the most hapless of the crooks Major Courtney, Danny Green is rather likable as the softhearted brute known as 'One-Round', a particularly youthful looking Herbert Lom is effective as the most serious minded of the criminals Louis, but my favorite of the supporting crew is the man who matches Alec Guinness's ability to play multiple characters in the same film and that is of course Peter Sellers as Harry Robinson. Harry Robinson oddly enough might be the most normal among the rather strange gang that he associates with.

Sellers is possibly best known for his multiple characters in Dr. Strangelove, but Sellers in many of his performances tried to do something unique in terms of his voice and appearance. Sellers plays Harry Robinson is a cockney spiv which means he does not have the most refined accent but does have a technically refined manner and appearance. The cockney is one accent that is most often overblown in performances, and even though this is a comedic performance Sellers actually gives a rather restrained accent. Sellers creates his very own cockney accent here, it never is typical although he rightly suggests the type  Sellers is excellent though because he never actually appears to be performing and turns Harry into his own man surprisingly well.

Sellers oddly enough could be looked upon as the straight man of the film. The old lady Mrs.Wilberforce (Katie Johnson) is a little too aloof to be the straight man, and Lom's Louis is technically a bit too vicious of a fellow to really be the straight man. This leaves Sellers as the criminal whose head is on straight yet does not quite know what he is doing in this plot conducted by Professor Marcus. The performances in The Ladykillers really are about two things. The first being the creation of the characters, which all the actors go about in rather unique ways, and Sellers handles this end splendidly of course. The second thing is taking these characters that they have realized and having them appropriately react throughout all the mischief that is involved with the bank robbery.

Sellers in the reactionary regard competes with Guinness for getting the most laughs throughout the course of the film. Sellers is consistently funny as Harry is forced into one awkward situation after another in an attempt to make it out of Mrs.Wilberforce's house with a considerable amount of cash. My favorite moments of his performance are in one very amusing scene as the old lady's bird reeks havoc. Poor Harry faces the worst brunt of the bird finding his face quite badly scratched. Sellers's reaction is hilarious as he shows Robinson as obviously quite ticked off, but just keeps it within himself for the sake of the job. Sellers also has great moments before his exit as Harry finds himself picking the wrong lot, and attempting to handle things his way, every troubled reaction from Sellers is pure gold.

The Ladykillers's ensemble is indeed terrific and in all likelihood is the best ensemble of 1955 with the whole cast coming together especially well, Sellers's supporting work though is the best support in the film. His performances works particularly well because his depiction of Harry Robinson who can be looked as the opposite of Guinness's Marcus in several ways. Unlike the bizarre Marcus, Robinson does look relatively normal, but as well where Marcus seems to know exactly what's going on and what to do Harry tends to be a little more lost at times. Sellers plays the opposite end to Guinness in this film with the great comic precision one would expect from him, and with the quality of his performance here it is a little surprising that took as many years to truly breakout as an actor.

I was actually thinking of doing a special review, but I just ended up being a little too busy.

=D Merry Christmas, also if you think Herbert Lom looks youthful in this, you should see him in Hammers version of The Phantom Of The Opera lol he looks like he is about 55 lol.