Takeshi Kitano did not receive an Oscar nomination for portraying Kitano in Battle Royale. 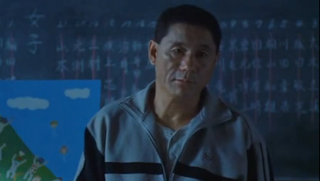 Battle Royale is a gruesome and effective film about a class of Japanese students pit against each other in a game of death until only one student is left living.

Takeshi Kitano plays the only major character in the film who is not a student. He plays one of the two villains of the piece, the other is a psychotic special student sent in as a ringer of sorts to the game. Kitano plays the most dangerous villain since the guy from Bill and Ted's Bogus Journey because there is nothing worse than an evil gym teacher, yes Kitano is not technically a gym teacher but the way he dresses makes him look like one. Kitano plays well Kitano the class's former teacher who disappeared after being assaulted by one of the students, he returns though to be their new instructor, the instructor to tell them that they will be playing a most unusual game as a group.

Kitano makes a strong impression in his early scene as he welcomes the class back. Kitano, although does hide a secret with his performance which I will get to, takes a brilliant approach of playing his namesake still as a teacher even with what he does as he introduces the game. Kitano brings a disturbing ease in his performance as he seems to treat this class as any other day of schooling. He is that of the teacher casually fielding questions just like a normal teacher would, trying to call the kids attention to the educational video by acting interested in it himself, and even distributing punishment like a teacher. When someone speaks out of turn or something, Kitano does not stress the fact, but quickly raises then quiets his voice ending the problem swiftly, although he murders the kids unlike a normal teacher.

That is Kitano's major scene and he delivers exceptionally well by just delivering the scene as if Kitano was a proper instructor except one who uses a particularly twisted method to handle his class. Throughout the rest of the film Kitano comes in and out mostly to announce which students have been killed. These moments he continues his method of being the mentor of sorts in his announcements as he sometimes derides their behavior, or encourages them in some understated way. Kitano still has his secret he is holding though that slowly comes out as the film progresses as we see how he spends some of his time as the games go on around him. The secret being that his blase attitude is not from him being evil, but rather Kitano's attitude comes from being depressed.

Kitano is very interesting the whole way he plays this depression, because he honestly plays it a down to earth fashion and it somehow fits in with his absurdest nature of his character. Kitano shows it very bluntly that he has had his spirit destroyed not only by the way the class treated him, but as well because his own daughter hates him as well. Kitano is even strangely moving because he is very genuine in these moments and goes about playing this part of Kitano in a realistic fashion. Kitano though tries to deal with his depression though by clinging onto one idea that remains hidden for most of the film, until it is finally revealed near the end of the film when Takeshi Kitano once more becomes the star of the movie.

Takeshi Kitano is excellent in this scene in combining the conflicting nature of his role into one brilliant finale for his character. On one side we see that Kitano has been wanting one of the girls to win the game. Kitano carefully portrays this not as a creepy lust, although it is creepy, but rather a much more pure love as she is the only young person who has shown him any love including his own daughter. In the same scene we get his twisted sensibility too especially in his great exit to the film. He makes the absurd exit have a great impact because he plays so perfectly straight. He manages to make Kitano more than just an evil teacher, although he does do that too, giving a oddly complex and powerful portrayal of a man who has lost his connection to the next generation.

Louis, what did you think of the rest of the cast?

I thought that most of them gave a very mixed performance. They had some good moments, but there were also moments when they overacted badly.

I would agree with you that there is some of that Japanese overacting to found particularly from some of the bit part students. On the whole though I thought the cast was pretty solid with most of the bigger parts being handled rather well.

I particularly liked Taro Yamamoto in this, even though I agree that Kitano was the best.

Off topic, but I have to ask. Louis, since you said in you review of Richard Jordan that you never cry during films, I have to ask how close did you come during 12 Years A Slave?

The ending is very moving, but it did not hit me quite on the same level as Richard Jordan's last scene in Gettysburg or Dana Andrews's performance in The Ox-Bow Incident.

I actually did cry at the last scene in 12 Years a Slave. Uh, I mean, I had sand in my eyes.

Is your cinema near a beach or somemat?