Edward Norton did not receive an Oscar nomination for portraying the narrator in Fight Club. 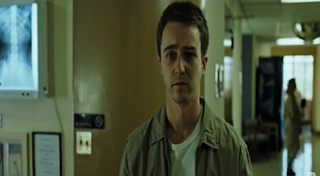 Fight Club is a film with an intense fan club to say the least, but not one that I subscribe to I'm afraid. I don't hate it, and I liked it well enough on my first viewing, but its style really wore thin on re-watch.

Edward Norton plays the unnamed protagonist of the film who starts out as that of the corporate drone who is a numb man going through his life just buying random things for himself. He only finds anything for himself by releasing himself emotionally at various support groups. Norton's performance is that of a very average sad sack suffering from insomnia and just a general detachment from all things. Norton's pretty good in just being a general downer of an individual showing us a man without a past and without much of a future other then faking some sort of ailment for the most basic expression of emotions possible, which really does not bring him to much of anywhere either, but Norton plants the motivation for the narrator's desire to change. 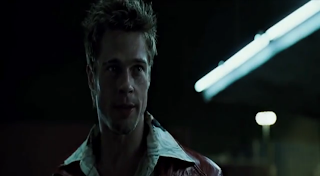 The narrator's life does not really start changing though until he meets Tyler Durden played by Brad Pitt who also did not receive an Oscar nomination for this film. Well here is the spoiler although I am sure you already know it as it is only kept a better secret than the twist ending to Planet of the Apes which is usually used as its poster these days. Anyway the twist is that Tyler Durden is in fact just a figment of the narrator's imagination who the narrator uses as the visualization for himself when he does everything he has dreamed of doing. This means that Brad Pitt does not play a real person rather just an idea of a man, and that idea is being as the ultimate ideal man who is a rebel who wants to make his own cause.

There is not a single scene with Pitt that does not feature Norton but it is Pitt's character that drives Norton's forward making them co-leads who are constantly intertwined in even more way then you think even when they meet near the beginning of the film. Once they meet the narrator always seems one step behind as Durden seems to be shaping him through his long line of tasks which all start with forcing him to get into a violent confrontation as a more volatile way of breaking the narrator's detachment. Norton's and Pitt's performances are on opposite ends. Where Pitt portrays Durden as a constant who always seems to know exactly what he is doing, Norton portrays the narrator as constantly a step behind who is changing due to each of Durden's actions in one way or another.

Pitt's performance is all about his charisma, and although I will might be severely beaten for this I find that Pitt certainly has charisma here but not all time greatest macho man ever charisma. Pitt is an actor with that natural star magnetism at least in most of his roles and it is present here although I don't feel he goes the extra mile with this performance as Tyler Durden. Yes he is strong and assured in his performance but he never quite makes Durden the figure of almost godly power. I should note this is only criticism of the highest order in that I think the point of Durden is being perfection a point I don't feel Pitt reaches with this performance. Having said that though Pitt is good in the role well at least the first three fourths of the film.

Although I might be burned with acid for this, I'll say that I actually prefer Norton's performance as the narrator. Norton's performance, until the very end of the film, is a reactionary performance and he is rather effective in portraying the way the narrator changes through the story. Norton has the right sort of amazement as the narrator watches and joins Durden as he starts the titular Fight Club and goes on to commit all sorts of mayhem in his anti-establishment behavior. I like Norton's performance because unlike all the supporting players, who I feel terribly overact in this film, Norton conveys the life changing effects of Durden in a believable, far less bombastic fashion, through the way he brings a life to the narrator that was missing at the beginning of the film.

The end of the film changes things for the worse when it comes to Pitt and I suppose for the better when it comes to Norton. Once the twist is revealed Pitt decides to play Durden as a bit more of the villainous character than necessary. Frankly Pitt just needed to continue how he had gone from the start as Durden meets his end, but instead he ends up overplaying Durden in his concluding appearances. The idea that Durden is just a figment of the narrator's mind is taken too far with Pitt as he starts playing him, well as an imaginary character. I suppose that makes sense, but I think it would have made even more sense that Durden stay as he was before as since there is no reason Durden needed to go the way that Pitt takes him at the end of the film.

Norton on the other hand is very good as the narrator is completely taken aback by the revelation and tries very hard to set make some sort of sense of it all and stops Durden(his)'s plan. Norton sells the twist with his performance which excels in portraying the messed up mental state of the narrator as he has to deal with his own disbelief, and fear of what is going on. Most importantly though in these scenes Norton shows the narrator come into his own as a man. Norton loses that detachment from the beginning, but he as well loses that dreamy amazement in Tyler. Norton instead gives the narrator a will of his own and brings the most genuine emotions in the film as the narrator desperately tries to save his although sorta Tyler's lover Marla (Helena Bonham Carter).

Although Brad Pitt's performance is the much more talked about performance in this film, in achieving the purpose of the character Edward Norton's performance is the stronger work. Pitt is just fine in the film but otherworldly he is not, and he comes close to going off the deep end in a bad way in his final scenes which could have highlights of his performance. Edward Norton does not give an amazing performance either and technically, in terms of the heights he must reach, he has far less of challenge, but Norton does meet his lesser challenge much more thoroughly than Pitt does as Durden. Although his character is the one who changes, Norton gives the consistent performance of the two which shows each detail of the journey of the narrator in a convincing manner.

(For Pitt, let the fire rain down upon me)

Are you a fan of David Fincher in general?

I think I should say yes as I love Seven and Zodiac.

I love Seven as well. I really love The Social Network, too. I really like Zodiac but I don't know if I love it.

I completely agree with you on Norton and Pitt, and the film, I think its just a fine film, for a film to be a personal favourite of mine, it usually has to connect me to something that I relate to,


Its only an opinion so I'm sure everyone else will respect yours lol, well I will anyway haha, the only way fire would rain down on you for me is if, well im sure you might know what would set it off =D lol

I just cannot lol accept Claude Rains losing for Notorious lol =D he already lost his Oscar in real life to Captain Hook (Russell) itd be so ahhhh if he loses again lol.

It would be kinda amusing to see your reaction if Louis decides to give alternate 46 supporting to someone other than Rains lol hehe.

I wonder what Koook160 will say about this lol.