Leslie Nielsen did not receive an Oscar nomination for portraying Dr. Barry Rumack in Airplane!. 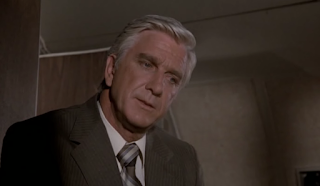 Airplane! is of course the scatter shot comedy in which they throw a gag at you constantly, and unlike the ones they make today most of the gags are funny.

One of the keys to the success of Airplane is in its casting as well as the general nature of the performances. Many of the actors cast were serious actors before this film like Lloyd Bridges, Robert Stack, Peter Graves, and of course Leslie Nielsen. Interestingly enough Bridges and particularly Nielsen became almost exclusively comedic actors after this point, and both of them appeared in several more spoof films. Of course the first of something often is the best, and this is certainly true of Nielsen's comedy career. Now as I said though it is not merely the casting which works, but what also makes the film is the way that these actors perform in this comedy.

Most of the actors give a dead serious performance who stay dead serious even when delivering completely absurd lines or completely absurd scenes. Nielsen does this the very best out of the whole cast, and I suppose it is pretty obvious how he managed to make a whole other career out of it. Now the key is that while it is never comedic, it also isn't dramatic so to speak. Nielsen tailor makes his performance it be extremely funny but not that he ever seems like he is playing for laughs even though he always is. The thing is you probably could not just take this and put it in another disaster serious movie there is an extra element that amplifies the comedy further than if he only played it straight.

What it is is that he does not seem to be taking just seriously, but so seriously that his life is depending on delivery every line with the utmost conviction. Nielsen never strives once from this code keeping that expression of the seasoned doctor who is adamant that the passengers made sick by fish must be gotten help very soon. Nielsen because of his steadfast manner is absolutely hilarious because it doesn't matter what the line is he is going to act like it is the most important thing possible. Because of this he makes every line very funny, as the immortal line "I am serious, and don't call be Shirley" could have just been a bad pun, but Nielsen makes it comedic gold because Nielsen acts like there isn't anything funny about it.

This is technically a one note performance, but that one note is a note of brilliance. Every time Nielsen is on screen he made me smile and elicited laughter. His consistently dead pan style makes every scene shine all the brighter, and despite technically doing the same thing throughout the film Nielsen never seems to become repetitive in the role. He stays endearing and his character is enduring throughout it all even manages to perhaps be even a little inspiring with his go out and win one for the Zipper speech. Its just an incredibly enjoyable performance that is the funniest part of this very funny film.

I did just see a youtube clip of its classic moments and it was quite funny =D.

Well 1995 has not been requested, but I will try to get to it sooner than later.