Bryan Brown did not receive an Oscar nomination, despite winning the AFI award, for portraying Lt. Peter Hancock in Breaker Morant. 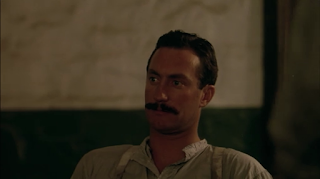 Bryan Brown plays one of the three men on trail for murder during the Boer war. Each of the three men fit into a certain category with Breaker Morant (Edward Woodward) being one without regrets for his actions and seeing it as being part of the harsh life soldier as well as always keeping the manner of a good soldier. The youngest is Witton (Lewis Fitz-Gerald) who regrets the killing as well as regrets having become a soldier in the first place. This leave Hancock who comes off as the least savory of the men for a variety of reasons. Hancock is a man who does not know how to be quiet and is the loudest of the men particularly when they sit in the courtroom.

Hancock is the brash one and Brown rightfully gives a Brash performance particularly in the courtroom scenes. Although Jack Thompson as their defense gets the big speeches Brown has a great deal of quick one liners. Hancock early during the trial does not hold back and will quickly try to shoot down lies. Brown is very good in these moments because he does not do this as a righteous man in any way. Brown instead does it like a man trying to shoot someone down in a bar he does it crudely and in a brash manner. Brown has him keep back ever so slightly as he still is a trained soldier though finding the right style for a man who is a soldier, but the type who will forget that without too much provocation.

Outside of the courtroom Hancock is just as brash and his attitude differs from the somber Witton and the steadfast Morant. Brown plays Hancock as probably the most angry in their circumstance. When it comes to him and the killing there is not the duty expressed in Morant or the regret in Witton. Hancock is left as a man with a dog eat dog attitude, since the Boer killed many of their men and tried to kill them he does not have any regrets about what he did. Brown portrays pretty stone cold in just a sentiment filled with exasperation and hatred toward the enemy. Brown properly makes Hancock a man who is able with what he did because of his experiences that he went through.

Like Morant we do get little glimpses of Hancock's personal life which Brown handles quite effectively. Again Brown is rather blunt in just showing how harsh Hancock's life really was. There is one quick flashback to his family and we only get a hint of this relationship. Brown portrays it as a rather sad relationship. There is perhaps a love there but not in a way that seems with much warmth if any. Brown is very subtle as he suggests a considerable sadness is in this man's life. We do not learn what it all is but Brown suggests it beautifully. Brown shows the sadness as really the true man which lies beneath his anger and discontent he expresses otherwise.

Bryan Brown's performance is a strong facet of this film and fills his place as the soldier who was willing to murder as his experience in the war never suggested that he should do anything else. I will say out of the three soldiers on trial in the film Edward Woodward did hold my attention the most and I found his personal story to be the most powerful. Bryan Brown and to a similar extent Lewis Fitz-Gerald still give two interesting and moving portrayals on their own because each of them find what exactly motivates each of the soldiers and both what exactly brought them together to this trial but as well what exactly separates them in their attitudes. Brown might not be the best part of the film but he is one of the reasons why this is a great film.

Ive never seen Breaker Morant, in fact id never heard of it until the blog, it looks like a really great film, but since I already bought High and Low before ill have to wait lol.


@Michael Patison: I did manage to see Tom Courtenay in Dandy In Aspic and I thought he was great, Tom Courtenay as a sociopath is pretty cool to watch despite him being a bit oddly cast.

also, being that Louis favourite Asian actor is Toshiro Mifune, who does everyone else have as their preferred Asian actor.

Breaker Morant is really terrific. If you have Netflix, you can stream it.

As for Courtenay, I'll admit to only having seen bits and pieces of Dandy in Aspic, but I found the pieces of his performance I saw to be really great, as you said, in spite of his odd casting.

I haven't really seen any Asian films, so I couldn't say on that account. I know my background is sorely lacking and that not having seen much Kurosawa lessens my stature, but I'm working on it.

who is this foreign performance you speak of lol =D.

Jurgen Prochnow in Das Boot. It's definitely a director's showcase for Wolfgang Petersen, who decided to throw away his great directorial skills and make mediocre action thrillers once he went English-language, but Prochnow is great.

ill definitely make sure I vote him if it comes to that year and you don't get the chance to request him =D.

I'll have to have a huge number of years wrong, but thanks. :) I mean I've also requested 1981 and somebody else I know has requested 1987 and I think somebody has request 1986 so that's several more run-throughs of the decades.

I requested 87. Seriously, if you guys haven't seen River's Edge yet, SEE IT ALREADY.

Probably not the right place to do this but just wanted to say, RIP James Gandolfini, a tremendous actor who will be missed.

This is certainly a fine place to do it. Indeed he will.

Would you happen to know how to embed YouTube videos on here, Louis? I'm trying to get up my first post about music in movies and on TV with embedded videos so that you can just listen and read instead of having to follow a link, but I've tried a bunch of things and every time I publish, it never has the actual videos, just code-type stuff.

Yay nevermind I figured it out literally right after I posted.