Donald Sutherland did not receive an Oscar nomination, despite being nominated for a Golden Globe, for portraying Calvin Jarrett in Ordinary People. 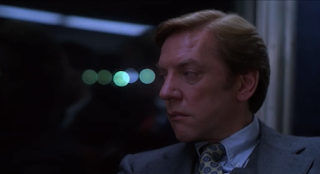 Ordinary People won best picture as well as Best Supporting Actor for the clearly leading Timothy Hutton, and was also nominated for Best Actress for Mary Tyler Moore and it got yet another supporting actor nomination for Judd Hirsch as well. The only main player in the film unrecognized was the never nominated Donald Sutherland who was probably either knocked out by Robert Duvall's fine work in the Great Santini or Jack Lemmon's terribly overblown performance in Tribute. Sutherland though also may have missed because in terms of the type of acting noticed by the academy he gets the short end. Timothy Hutton gets the big emotional outbursts, Mary Tyler Moore gets to be the almost flamboyantly cold character, even Hirsch gets some fairly juicy lines in his scenes, but what does that leave poor Sutherland.

Well it actually leaves Sutherland as the heart of the film. After the death of one of the sons of the family it leaves the younger son Conrad (Hutton) suicidal and very much troubled, the mother Beth (Moore) who has only become colder and more distant to her son who was never her favorite as well tries to keep her social life just the same, Calvin the father though tries his best to deal with and keep his family together. Sutherland due to this has the most subtle work here in that much of his portrayal of Calvin's feelings are silent especially early on. Sutherland portrays Calvin as just trying to get on his life while still being clearly changed by the tragic event. We see him with his wife at various social events, and Sutherland shows him as man attempting to be there for his wife but his mind is always elsewhere.

Sutherland does two things really well here in that he shows that on one hand Calvin really just does not care much for the things they use to do, although that is all that his wife after seems to care about both through the boredom of his expression as well as his almost boyish enthusiasm when he suggest to his wife that they just defy expectations and do something else for a change. Sutherland is really good because it is not that Calvin is putting on any sort of facade, but rather he is trying but just can't feign enthusiasm for things that just are not on his mind. He as well does allow us to see what is on his mind which is not only the tragedy of the death of his son but the mental health of his living son. Whenever it comes to Conrad Sutherland only ever portrays such a genuine earnestness that establishes properly that Calvin desperately wants his son to get better.

Sutherland has Calvin put on a happy face again not as a facade even though it is not entirely true, but rather Sutherland presents it as Calvin trying to make things work. Sutherland has the right visible effort that he puts into Calvin as he tries to bring the three of them together as a happy family and his cheer is not false but Sutherland suggests is perhaps that Calvin is pushing it a little because he really wants to make the family come together after this awful experience. Of course Calvin himself is not over it, but he does indeed stay quiet about it at least for most of the film. The grief that Sutherland shows comes in a subtle but powerful fashion. It is not the overwhelming grief that Timothy Hutton portrays instead it is a withdrawn yet still palpable. A scene that always stays in my mind is a moment where Calvin thinks back when he stopped a fight between the boys and we see him thinking about it. Sutherland has such a simple expression yet one of man truly haunted by this tragedy.

Through most of the film Sutherland makes Calvin always the one just trying to make it work, and he is terrific in the way he portrays Calvin's methods of working with everyone. With his wife there is a distance but at times a really energy that Sutherland brings to the scenes like Calvin is trying just to get her warm up any way he can. With Conrad he is different but Sutherland once again shows Calvin trying to make it work as he portrays a genuine warmth with him. Sutherland always makes it clear that Calvin absolutely loves his son without exception and only wants the best. Sutherland even shares one scene with Judd Hirsch's psychiatrist Dr. Berger. It is a great scene as Sutherland brings that negotiator quality out of Calvin again as he tries his best to defend his wife's coldness as well as support his son as well. He also very effective allows an underlying uncertainty in this scene suggesting what becomes his path for the rest of his film which is questioning his wife's behavior.

The late scenes of Sutherland's performance is finally when he breaks the mold of Calvin just trying to make it work and starts to confront his wife. Sutherland plays these scenes out brilliantly starting so modestly just asking her in a somber tone why even at her sons funerals she was concerned with unimportant things. This escalates to a much more open fight and again Sutherland is excellent because he absolutely earns the frustrations in the scene because it is something he has been building to quietly from the beginning of the film. Their fight ends though as Calvin once again confronts her although not about Conrad so much and rather their own relationship. Sutherland is outstanding because how he forcefully presses her about her refusal to deal with the family's emotions, but as well beautifully shows how dealing with this conversation which is ending his relationship with the woman he has been with for year is tearing him apart inside.

Sutherland's work here may not have been the chosen Oscar nominated work from this film but he should have been especially over Lemmon. Sutherland gives such a low key yet so very heartbreaking in his underplaying by just getting down to the barest of emotions in a man who is only trying his best to try to get over them and later face them. Calvin attempts to be the glue of the family and Sutherland is the glue that holds the film together acting as a balancing act between the emotional extremes found in Timothy Hutton's and Mary Tyler Moore's performances. He finds that middle ground without ever being forgotten among the fire and the ice that surrounds him. He creates a complex portrait of Calvin Jarrett and fills every scene he is in with an earnest devotion and a true poignancy.

He certainly is not the greatest actor alive and he may downplay his roles too much sometimes to the point where he's boring or simply not impactful, but Sutherland is one of the best actors never to be nominated. His performance here puts him on that list, and high on it at that, for me.

Louis, I know you're not doing Supporting 1980 until next week, but I'll be at camp all next week and will be no where near internet access. So I'm going to give a request now for when you do Supporting. It's a voice over performance but it's the greatest voice over of all time: James Earl Jones in The Empire Strikes Back.

Do him for 1970 Supporting actor in Kelly's Heroes. He's hilarious.

He was great here. Louis when you get to Best Actor 1964 Please do Peter Sellers in A Shot in the Dark , Much better than t The Pink Panther ; D .

Phenomenal spot on work from Donald and a great spot on right up,if it weren't for De NirO i'd have Donald winning,what did you think of Tyler Moore and Hutton,did u think he was ott i sort of get that from your review,Will you ever do actress/supporting actress.

I did not think Hutton was over the top I think his performance is very intense but fitting for his emotionally volatile character. I also like Moore whose work is especially disconcerting when compared to her television work.

I don't think that I will do actress/supporting actress.

Louis which film do you prefer? Ordinary People or Raging Bull. I know you think Elephant Man was the best but just out of those two?

I prefer watching Ordinary People even though I do think Raging Bull direction is superior.

I felt he was overshadowed by Hutton & Moore, but this one definitely needs a rewatch. I like him in general though. Great review!