Marcello Mastroianni did not receive an Oscar nomination for portraying Guido Ansemli in 8 1/2. 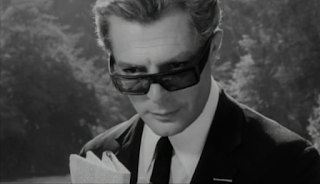 8 1/2 is a well made film about the strange journey a film director goes through as he struggles to make his next film. I only say well made film because it is a film I liked, but I just am not nearly as passionate about it as so many are.

The last time I reviewed Mastroianni is was for his performance in Federico Fellini's La Dolce Vita this time he once again teams up with the director although this time he acts as the surrogate for the director within the film. As with La Dolce Vita Mastroianni acts as a guide of sorts for the film although to different ends. Where in La Dolce Vita he made his way through various vignettes as the tired journalist where he did interact but just as often kept as a distance. In this film though Guido is always a part of them as sometimes they are only in his own mind yet this time his interaction is a much firmer thing yet there still seems a distance in this case as well.

8 1/2 is most definitely a director's film as the main character is there to even represent the director. Fellini pretty much strong arms the entire thing and it is hard at times to notice anything other than what he is doing at any particular time. The fantasy scenes in particular are shot in a way that never brings emphasis to what the actors are doing instead always focusing on what Fellini is doing instead. This is the case throughout the film and no one stands out like Fellini's direction does. It is his film the entire running time and therefore the actors at best are given limited time to do much of anything and even in that time they usually confined there in some fairly simple character requirement.

Mastroianni is probably given the most to do as Guido although even his part is quite limited in the scheme of things. Mastroianni is a very passive actor which works at times like his dead pan work in Divorce Italian Style as well as in La Dolce Vita where he was playing a passive character. This time he again plays a passive character although one can wonder if he necessarily had to be this way. Another actor may have made their own take on Fellini like say Peter O'Toole in the Stunt Man sort of thing, but Fellini himself probably would not have approved. In fact Mastroianni passive style probably made him the perfect choice as Fellini then knew there would not be any out of control characterization standing as his surrogate.

Mastroianni plays Guido as very much an observer above all else. Most of the time he is fairly downplayed and mostly seems to be examining what others say more than directly reacting to them. This approach actually does entirely fit the part of Guido in this film. He seems usually in a bit of a daze of sorts, a strange self reflective sort of daze rather than an uncaring one. This approach does suggest what is exactly going on through his head as he makes his little personal journey through the film where he has trouble making a statement with both his relationships as well as his new film. Mastroianni makes him as man trying for something but very much grasping into the air.

There really is not much of an arc to his character in this case. Where La Dolce Vita Mastroianni portrayed the slow descent of the man who slowly failed to find some sort of redemption for himself leaving him as a shell of a man only able to live with gilded extravagance, in this film he does not have the same type of journey. Guido is in more than anything a frame of mind that he cannot escape that leaves him on basically the same level of thinking throughout. Guido and Mastroianni's performance of him is almost a constant and his character journey is not really portrayed by a change in Guido but more of a change in what Guido sees therefore again the spotlight is given to Fellini and not Mastroianni.

This is probably exactly what the director wanted as his surrogate of course a performance being what the director wants is not necessarily a good thing. Looking entirely on its own though Mastroianni's performance is good for what it is. He does express what his character is going through and more importantly for that he actually allows us to understand a little more of Fellini is doing with his direction throughout. If it where not for Mastroianni work it would be much harder to understand any of the fantasy sequence and what they exactly mean. Mastroianni though in his segments establishes his character and what Guido is going through to allow us to understand what it is that Fellini is doing.

La Dolce Vita was a better collaboration between the two in terms of being collaboration. It allowed both to have their moments for example Fellini gets to shine in the famous fountain scene, but as does Mastroianni through his performance in the scene which receives substantial focus. Mastroianni even sometimes gets stripped of even reactions in this case like the fantasy dinner scene where he speaks to the women of his life and it is all from Guido's point of view. His point of view means the camera's point of view which means Fellini's point of view leaving Mastroianni holding the short straw. This is a good performance that serves its purpose splendidly but Mastroianni is always overshadowed by who he is suppose to be playing.

I heart this performance.

Marcello seemed like one of them people who just did what he was told like a good little doggy rather than argue with Fellini or clash with him and tell him " I want to act rather than be part of the scenery.

Marcello Mastroianni’s easy charm was an ideal vehicle for portraying decadence. His nonchalant air was redolent with womanizing and sex. However this decadence was aloof. It rarely expressed itself in unabashed glee. A more likely expression was an amused shrug and resigned surrender to the demands of hedonism.
http://modernartists.blogspot.in/2012/03/marcello-mastroianni-seductive-look-at.html