Laurence Olivier did not receive an Oscar nomination, despite being nominated for a Bafta, for portraying George Hurstwood in Carrie. 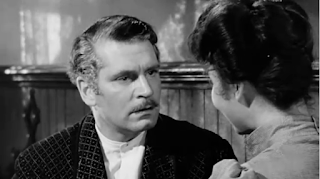 Carrie is a decent enough drama about a young woman of the same name (Jennifer Jones) who tries to make her way in the city of Chicago.

Olivier plays the one of the men she encounters in Chicago who manages a high class restaurant that Carrie is meeting a rather unscrupulous man Charles (Eddie Albert) who she is in a relationship with for mostly monetary reasons. Olivier in his first appearances as Hurstwood portrays him a rather unassuming but also rather charming man. In his usual Olivier fashion he has an adjusted accent which is a lowered Americanized voice that Olivier uses that actually is rather well done, and gives Hurstwood a natural warmth. He quickly makes Hurstwood just a likable and amiable face that works quite well in the contrast to Eddie Albert's portrayal of Charlie who always seems to be putting on his charm a little too much.

Hurstwood does not just stay as the nice manager of a restaurant though as he quickly becomes infatuated with Carrie. Olivier plays this quite well and he is a bit of the master of that face of longing. Olivier importantly builds this up quite well and honestly establishes the way Hurstwood's feelings toward her grow. Olivier always makes it rather clear in Hurstwood's glowing expression toward her that slowly build as he spends more time with it. He is very understated in his depiction of Hurstwood's interest in her, but very effective in the subtle fashion that he portrays the growing passion in Hurstwood which slowly becomes more and more pronounced.

Of course there is a reason why Hurstwood stays so understated about the whole thing, and the reason is that he himself is married to a wife who could care less about him. Again Olivier mainly internalizes the emotions within Hurstwood where they are quite evident in him and plays it as burning bitterness as well as a sadness in Hurstwood. Olivier is careful to put this right in his happier moments with Carrie that even when there is an expression of joy in Hurstwood he never forgets his terrible predicament with his own wife either. Olivier shows us a man trapped really in a difficult state of two kinds of repression one of the hate for his wife, and the other for his love of Carrie.

Hurstwood eventually does run right off with Carrie, but things do not improve for the man as he suffers financial difficulty with Carrie as well as his vengeful wife. The rest of Olivier portrayal is that of a man slowly decaying emotionally as the whole world seems to be against him. Olivier is quite moving in this depiction as just about everything goes wrong for the man, and Olivier manages to reflect what this is doing to him. What makes this never repetitive though is that Olivier has short little moments where there is the chance for something better to come from Hurstwood. There still is that genuine love for Carrie, and Olivier powerfully establishes a happiness that slowly fades from him.

I personally will never understand those who think Olivier could not attune himself for film, as this is a perfect example of exactly how well he did understand the medium. There is such a great attention Olivier pays to the close up here and that is where the strength of his performance is found. His characterization is always based on what is going on through the mind of this lonely man and throughout the film he calmly lets us into the man's great pains and his meager joys he has in his life. I would not put this up there with the all time great Olivier performances, but this is a very strong portrayal that made this film worth watching.

for some reason I know a lot of people who dislike Olivier with a passion, I don't know why though, maybe his attitude or something lol.

I knew a Canadian film professor who hated him. The problem was his reasons for disliking him made little logical sense, such as the fact Olivier hated method acting. He came up with bogus arguments that Olivier never "became" the role because he wasn't a method actor like Brando or *snicker* Sean Penn. Though honestly, this guy may have been the worst critic in the world just for his hyperbolic, poorly constructed essays and reviews alone.

I also know somebody who hate him. Their really stupid criticisms all relate to his Shakespearean films, which they say are supposed to be plays and not films. I don't get that. Tons of other movies, good and bad, are play adaptations. I guess it's just that Shakespearean dramas are more obvious, but I still can't understand their criticism even a little bit.

On a completely different note, has anybody seen a Kurosawa they didn't think was worth the time and which of them were simply okay as opposed to great or better? I'm trying to see some of his stuff (I've only ever seen most of Throne of Blood, unfortunately), and I want to know what to focus on.

Out of the ones that I have seen the only one I did not think was very good to great was the Idiot which I still thought had merit, and really my main problem was that it was disjointed which comes from the fact that the only copies that exist are that of a butchered studio cut.

Honestly I would highly recommend watching all the ones that I have reviewed performances from at least, but to start with one specifically I would suggest High and Low.

I REALLY don't get the "taped play" argument concerning Olivier, considering he was the first director to make a Shakespeare adaptation feel cinematic and atmospheric with Hamlet.

I completely agree, koook. Personally I like but don't love Shakespeare and sometimes get a little tired of reading him in lit classes, but I will never get tired of watching a well-made Shakespearean film adaptation, and Olivier is the one who started that trend of the well-made ones. I would argue that while he isn't a better actor in any way than Olivier, Kenneth Branagh's adaptations are on the whole better than anybody else's.