James Mason did not receive an Oscar nomination for portraying Ulysses Diello in 5 Fingers. 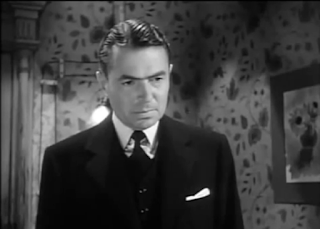 5 Fingers is a good enough thriller about the valet to an English ambassador who sells secrets to the Nazis.

James Mason plays the main character who is the spy who has no hesitations in making a deal with the Nazis to trade his employer's secrets for money. Mason is such a cool customer it is no surprise that he was cast as a spy where that sort of attitude is a must. Ulysses is not exactly your usual sort of spy in that he does not work for anyone in the way one would usually expect. He does not work for the Nazis in the traditional sense as an agent he technically is always a freelance, he does not have a connection directly to the Nazis he only corresponds with them to give the information he has only so he can get the money that he wants.

What the main feeling that Mason conveys in his performance as Diello is a truly intense cynicism in his performance. When he talks to the Nazis and deals with them for the money there is not any passion in giving the secrets. Mason does not suggest in any way that he wants to hurt the British Empire or help the Nazis. Mason instead plays him as a man who does not care, the only thing he cares about is the money. Mason is brilliant with just how brutally cynical he is in his characterization of Diello. There is nothing optimistic or positive in his portrayal in anyway, and it is all the more chilling because there isn't a passion in the evil he is doing either.

Mason portrays him as completely unscrupulous man and tells us exactly why he would act this way through his demeanor that feels no love for almost anything. Mason adds to this even more by portraying Diello as quite a different man in his role as the valet. Mason does not over do it as a big fascade in any way, but really just makes him a pretty pleasant sort of servant. He is entirely unassuming does not suggest any cynicism just a man you would not necessarily notice in any way, and he is convincing that he could go unnoticed as long as he does. As Diello in his mode on the valet he is the speck in the room that can hear and listen to the secrets well never seeming like he could ever leak them.

Diello does care about one thing in that he tries to win over an equally unscrupulous Countess (Danielle Darrieux). Mason is very good in these scenes because we do see a little more to Diello although Mason very much underplays it. He does it well to suggest that he does care for the Countess, and there is a slight warmth, but slight because his nature forbade him from offering any more. His attachments comes to bite him as the Countess betrays him several times. Each time Mason is terrific showing a vulnerability in his otherwise thick hide in excellent moments where we see just how much the revelations of his betrayal do cause him pain.

Mason though does show that Diello tries to keep up his style of cynicism and he is quite excellent in the late scenes as he tries to play off both the allies and the Nazis and get off Scot free doing so. Mason absolutely knows how to be the devious sort that Diello is. He plays the scenes with an assured intelligence as well as a certain pleasure. The pleasure is adds so much to these scenes and adds just the right extra element of villainy in the man. Mason lets us see that the smugness of the man enjoying being able to trick basically the whole world, and in doing so being able to make himself a nice lump sum of cash at the same time.

Diello in a twist finds himself the fool, and because he made Diello so smug we as the audience can quite enjoy him losing all of his assumptions as Mason leaves him almost a loss for words. He does leave with a last laugh of sorts when he finds out the Countess who betrayed him has suffered the same fate as him. Mason final gesture is a perfect end for his character as we see the nature of the man one more time who will forget his unfortunate circumstance to entertain himself with the thoughts of the suffering the woman who has betrayed him. That final action really sums up Mason's performance. Mason never asks for sympathy, nor does he earn it instead he gives a compelling turn simply by emphasizing just how much a cold bastard Diello really is.

look at you swearing, not such a wise old monk now are you hehe =D lol.

also I think the best performance Mason gave as a spy was in The Deadly Affair (1966) which if your a fan of John LeCarre (The Spy Who Came In From The Cold and Tinker Tailor Soldier Spy) then you would like that just as much =D.

If I were to rank my top 5 James Mason performances (I can think of over 24 great films he has been in since I think he is probably tied with Claude Rains as my favourite actor) I would go:

RatedRStar: I don't often swear here but I could not think of a better word to describe Mason's character here.

I'm sure I'll be reviewing Mason for most if not all of those performances you listed.