Edward G. Robinson did not receive an Oscar nomination for portraying Johnny Rocco in Key Largo. 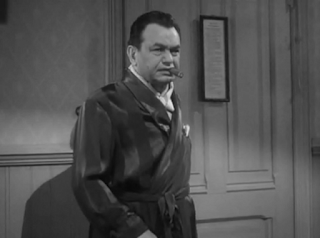 Edward G. Robinson plays the main villain of the film who is the boss hiding out in a hotel along with his small crew of thugs. Robinson is best remembered in these sort of mobster roles his breakout role being in Little Caesar. It is not wonder though that Robinson found himself so commonly cast as a gangster as he certainly knows his way around in the part. Despite being of short stature Robinson knows how to own a scene and dominate it even though he is the shortest person in a scene almost even when every else is sitting. He has a way about himself with his squinting eyes and firm demeanor that creates an intensity all around in him that even though all his thugs might be bigger it is not surprise that he is in charge.

Robinson's performance here is of the purest vein of evil gangster. There is not any redeeming features about Johnny Rocco. Robinson plays up just the harshness of his evil as a day to day sort of thing being a career gangster and all. He doesn't mind being called evil in fact Robinson plays it that Johnny relishes being looked at with fear. Robinson has a force about him that really creates a strong menace within the film. It is clear that Johnny would not think two thoughts about having to kill any of them if he would be able to escape. Robinson makes him cold and without sympathy that fits perfectly for Rocco. Rocco is nothing but scum and Robinson plays him exactly as such.

Robinson is great at being the villain of the piece who takes over the film for a great long while. Although Rocco is just evil Robinson illustrates the various facets of this evil quite effectively. On one hand there is a man there, not a good man, but a man. One scene Robinson delivers particularly well is when Rocco claims that he is coming back since he no longer is nearly as powerful of a man as he once was. Robinson is very good there showing a false sense of pride as well as a shattered pride in the same breath. He wants them to all hear loudly that he is Rocco once one of the biggest men in the country, but Robinson subtly brings a sensitivity in this issue that suggest Rocco deep down knows he will never be that powerful again.

Robinson is never shy about Rocco's brutality but shows two main kinds of it. One is the direct and indirect violence he is able to inflict. Robinson is very good in these scenes because in the case of this sort of violence business is the only way he handles it. When he kills a man or gives out information that causes the deaths of more men he just does it quickly without spending too much time debating it. Robinson does not show that Rocco enjoys it exactly, but he does shows it that this is something Rocco has done and will do without questioning himself. He does this just like a profession a professional requirement as technically speaking he only does kill when he finds it necessary to save face or himself.

Robinson though is not so calm in his depiction of the psychological torture that he inflicts on those held captive as well as his alcoholic girlfriend Gaye (Claire Trevor). Robinson actually seems more vicious in these moments than when he is actually committing the violence as he is unabashed in the manner in which abuses all around him. Robinson shows a great joy in Rocco as he mocks all of his "guests" in one way or another whether it is their seeming cowardice or just their physical aliments. Robinson makes Rocco a man without shame fully willing to go to the lowest level in his attempts to humiliate and harm the others.

The worst though comes in his treatment of Gaye because Robinson plays these scenes in the coldest manner of all. Robinson portrays really the long troubled history between the two in his manner he takes with her. Robinson does not have Rocco smile or take any joy in mocking her, forcing her to sing, or refusing her a drink despite her alcoholism. Rocco still mistreats her without hesitation but Robinson portrays it something that Rocco does not get anything out of it anymore even. These moments Robinson makes the harshest of all by showing that Rocco at this point is just really going through the motions with her leaving both in the most sorrowful of state.

Robinson's performance as Rocco is a nicely complex and compelling characterization. Whenever he has a chance he illustrates more of his character. The scenes of the hurricane are particularly well handled by Robinson showing Rocco holding back the fear and trying his very best to try to keep his dominant personality even when it becomes rather difficult to do so. Unlike James Stewart in Rope which was a case of an actor being very miscast in a role but still giving his very best to make up for it, this is a case of an actor being perfectly cast in the role. Robinson fits into the role like a glove and it shows through his always confidant and forceful portrayal of Johnny Rocco.

I only liked Claire Trevor in this movie...apart from her, I found it rather dull...

I thought the movie was ok I think, I was kinda dissapointed in Bogart though, thought he would put a bit more effort in lol.

I agree about Bogart. I did not think he was really bad, but Trevor, Barrymore and Robinson act him off the screen in this one.

Maybe he was a little tired after giving such a great performance in The Treasure of the Sierra Madre.

Ya never know that could be why he wasnt nominated for Treasure, maybe the academy thought " Well hang on this guy was great in Treasure but kind of played it safe in Key so we ll not nominate him" lol.