Matthew McConaughey did not receive an Oscar nomination, despite receiving an Independent Spirit Award nomination, for portraying Joe Cooper the titular character in Killer Joe. 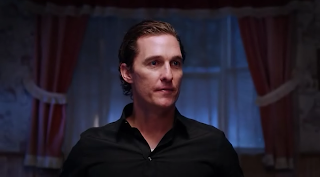 Killer Joe is a film that is bit of a mixed effort it has some good scenes, but at times it seems to trying to trashy just for the sake of it, and it never quite sheds the fact that it originates from the stage. Anyway the film is about a young man Chris (Emile Hirsch), who has a life threatening debt, who decides to hire a killer to kill his mother so his sister Dottie (Juno Temple) can inherit the life insurance money.

Matthew McConaughey has just in the past couple of years decided to fully shed his old imagine which was that of the romantic lead in bad romantic comedies. He certainly was not known for his acting abilities, although to be perfectly fair to McConaughey it is not like those films really gave him much of challenge, and it really was not his fault that those film where terrible they were bad concept deep for the most part. McConaughey though seems to be trying to reinvent himself by playing far more challenging parts, and perhaps the most in this vein yet is that of Killer Joe a police detective who on the side murders people for money.

McConaughey interestingly is that in his performance here he does not exactly refute his old screen persona, instead he molds it into this role that is far cry from that of his usual hunk. In his first scene where Joe appears McConaughey actually uses a great deal of his leading man style charm in his performance as he first comes onto to the scene meeting Dottie. As Joe McConaughey has a quiet charisma that he naturally infuses into the part that could have easily been missing in Joe, but it has to be there. He makes Joe not necessarily a man you would immediately suspect as a murderer, and one you could easily get along with, making it believable that he could run a business while being a police detective.

McConaughey because he is not at all obvious about the razor edge of the man makes far more effective in the early scene when he does talk about killing someone. McConaughey is great here as has Joe be so casual about the thing. He is good though as he shows just the slightest hesitations just in terms of proper table manners, but after the proper hesitations  McConaughey portrays Joe as a man who can speak about killing pretty easily as basically just a normal things that he does. He is quite chilling because of how easy going he is about it but inserts just the right amount of menace that never is obvious but is always something under his surface.

McConaughey actually is not in the film for an extraordinary amount of time, and honestly if this same performance was in a more accessible film McConaughey could have easily placed in supporting. I very much consider him lead though as his presence is overwhelming in the film, once he is on screen McConaughey makes such an impact that he can not be forgotten even when he is off. McConaughey tears into every scene, and is excellent as Joe sets up the deal with Chris. He shows Joe very much calculating the entire situation, and when he sets the rule that Chris and his family will die if they mention him in any way he says it calmly yet the threat is absolutely a fact.

Where the dirty nature of the other characters in the film are pretty much constantly on display, McConaughey makes Joe easily the most compelling though by portraying it as something that comes out. The sexual scenes of his performance are quite bizarre to say the least, yet they absolutely work through the intensity that McConaughey displays in these scenes. When the depraved nature of Joe's sexual appetites do come out it something that McConaughey portrays as having no bounds, and he is particularly striking in showing him even when there is going for this depravity he will still keep up his charm all at the very same time.

McConaughey works as Joe in a spectacular fashion keeping the element that allows a man to kill for money in check for most of the film until the very last scene which is just an amazing scene for McConaughey. In the scene McConaughey starts out calm and collected in Joe's fashion yet there is an incisive technique that he employs. It is fascinating in this scene because he shows the detective in show, the interrogator and he is incredible as he portrays Joe's ripping into Chris's step mother (Gina Gershon) to find the entire truth. McConaughey makes Joe like a volcano here as he slowly builds in his cruel method of bringing out the secrets the step mother is hiding, McConaughey's performance makes it something that is simply inevitable that she will have to break.

Due to the way McConaughey builds so brilliantly up in this scene when he finally does burst out in an intense psychotic violent it is entirely earned, and is as frightening as he should be. What is remarkable though is the way he can change on a dime in his performance. Such as in this last scene as he goes from the psychotic killer to the charmer in a seconds notice when it is required of Joe. This might be very hard to believe in the situation, but McConaughey nails it completely. He never misses a step succeeding in bringing about this unpredictability of Joe perfectly. His last scene sums up the strengths of his performance the ease he has in portraying both Joe's charm and brutality is spectacular. This is a very strong performance by Matthew McConaughey, and hopefully it is only an indication of things to come from the actor.

I'm really looking forward to Mud, which comes out in a few months. It's done by the same guy who did Take Shelter and his other movie before that was also well-received, so I can't wait to see what McConaughey shows us he can be in it.

I've heard this movie's really screwed up, which kinda makes me want to see it.
Did you see him in Magic Mike? Apparently he's really good in that. Seriously.
Also, what did you think of the other actors in this film?

Michael: I'm looking forward to Mud as well. McConaughey seems to be sticking to his reinvention, unlike someone like Robert De Niro who apparently just happened to be in a good film.

Anonymous: I have not seen Magic Mike, but I'll try to get around to it so I can add him to my supporting list.

As for the other actors Juno Temple is certianly intriguing in a very bizarre character. Gina Gershon and Thomas Haden Church are both good at playing up the trashy nature of their characters.
Emile Hirsch frankly gets out acted by everyone else particularly by McConaughey, but Hirsch is fine here as well.

Are you planning on trying to watch End of Watch before doing your final rankings?

Ok just wondering. I was completely surprised by how much I liked Gyllenhaal's performance.

Also, have you seen Quartet, yet?

Loved him in this and am of the opinion he's primed for a double oscar nominee year in 2014.

Michael: I have not seen Quartet. I'll try to see it some time down the road for Tom Courtenay.

I enjoyed Quartet, I thought Courtenay was good as always. As for Matthew Mahogany I reckon he ll get an oscar nomination sometime, it wont be a double though if anything Michael Fassbender seems more likely to do that kind of thing.

I was surprised how much I loved this movie, but thought McConaughey was only good, and not quite a great as you thought he was. But still, nice review!