Best Supporting Actor 2005: William Hurt in A History of Violence

William Hurt received his fourth Oscar nomination for portraying Richie Cusack in A History of Violence. 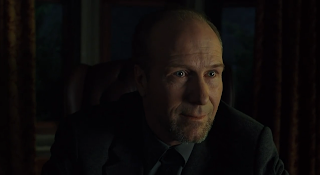 A History of Violence tells the story of Tom Stall (Viggo Mortensen) a small town family man who becomes a hero by killing to violent men. After killing the men and gaining media attention he finds men looking for him who believe him to be someone else a man involved with violence and crime Joey Cusack.

I must say it is interesting that William Hurt was the actor recognized for this film. After all Ed Harris gives his career best work as a crime boss who is one of the first men who comes looking for Tom. He has a good deal of screen time whereas William Hurt has a slim amount of screen time that makes up only a scene worth of material as Richie the brother of Joey who also is involved with organized crime. Hurt and Harris both had been nominated several times before, perhaps they felt they wanted to see Hurt again after his long absence, or perhaps it is because the academy honestly thought he was just that good in his short single scene performance.

William Hurt I do feel is a bit of an underrated actor these days as he really is one of the best when given the right role. This is not to say Hurt can't give a bad performance as he most certainly can, but in my experience with Hurt performances he really tends to be bad only when he honestly doesn't put very much effort into his performance like his performance in Lost in Space. Nevertheless I am always interested somewhat in a William Hurt performance especially if he really throws himself into a role and he most certainly does in this role as Richie Cusack. Richie is only on screen for a few minutes, Hurt certainly knows this and does his best to make the most of it.

Hurt never for moments tries not to make an impact with his performance as a character who is built quite a bit actually. We know he exists and is another threat to Tom's life that forces him to directly face his past. Hurt really was the perfect choice to portray the single scene character that is Richie since Hurt knows how to make an impact with a single scene. Hurt doesn't waste a moment of his screen time instantly driving hard into turning Richie into a full fledged character as well as creating a memorable visceral performance that will standout despite being very very brief.

Hurt most certainly does not underplay the role in the least, but I never said an actor can't go for a broader and bigger approach in a performance in some of those performances that I have criticized before. If an actor is talented enough and knows just how and when and how to do it they can succeed exceedingly well by taking such a risk with their performance. For me this is most certainly true for William Hurt as Richie here he frankly does not have time to underplay as Richie, Hurt knows this and instead strikes hard and fast with his performance and always tries to be the center of attention.

Hurt is excellent actually as he shows from just his first moment a certain relationship with Mortensen as Richie's brother. Hurt does convey a certain warmness and understanding with his brother that effectively gives a hint into their history together. Hurt plays the scene well as a demented older brother the whole time. it works because Hurt always talks to Mortensen like any older brother disappointed in his younger brother, although certainly to an extreme, but Hurt always shows Richie having a certain familiarity with his brother even if he does not fully understand him.

When the mobster comes out in Richie Hurt is at first quite chilling in the way he coldly indicates to kill Tom without much hesitation, but there is always the sense that he does not exactly love the idea of killing his brother. Afterward though when nothing goes as planned Hurt is darkly comic and effectively so in showing almost that as a mobster everything has been pretty easy. Hurt humorously shows the complete disblief in Richie at his men's utter incompetence. I particularly love his last reaction where he almost tries to shrug after his murder attempt as just being an older brother. This is a short performance by Hurt but a memorable and enjoyable one. In his one scene he holds the screen and surprisingly realizes Richie into a character of his very own not just a simple one scene antagonist.

Hey Louis , do they have any blogs on Best Supporting Actress ? Because I really want to make one !

William Hurt is one of the best actors.. http://www.hotmodelsactress.com/actors/actors1.html

i thought he was hambelievable in this role lol

I also think a good point could be that Hurt was nominated over Harris because he was a better actor in general =). This is William Hurts most famous role, nobody ever speaks of Kiss Of The Spider Woman.

one reason few people mention William Hurt in a positive light is because of Marlee Matlins book.

He might be my favorite leading actor =D, I love all 4 of his oscar noms (he was quite cute when he was younger 2 )

Anonymous: Yes here http://cinemareportcard.blogspot.com. There are few others that started a series on the category but never came close to finishing it.

RatedRStar: I would say the book did not help him but I have found many who best know him for Lost in Space, unfortunately. He is a great leading actor though and I wish he would get those lead roles again as Kiss of the Spiderwoman remains his definitive performance, and the film itself deserves greater recognition.

dshultz: Mortensen was terrific. Harris was as well and it simply is his best work. I know that doesn't sound like much from me, but I mean that without any sarcasm.

Anon: Yeah my blog is on Supporting Actress but I'm super slow so by all means join me!

I very strongly disagree with you on this one. Hurt is a ham (in this film), his character terribly written and he features in an incredible stupid sequence. The finale of History of Violence ruined the entire movie for me it was so bad. If anyone deserves recognition for this flick it's Ed Harris.

Well I would say Hurt and the whole ending is very divisive.