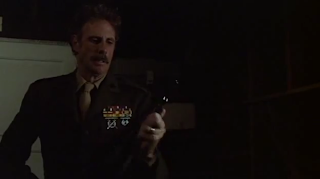 I will have to say right off there are many things against Bruce Dern's performance right away. Firstly from his first scene when he is running I understood exactly what his character was going right straight through the film, there was only one surprise in his character's actions which I will get to later. His character simply is a walking talking cliche for most of the film, and unfortunately the film portrayed the character almost exactly I expected him to be portrayed. The second problem for Dern is that when watching his performance as a traumatized Vietnam veteran I can't help think of Christopher Walken's and Robert De Niro's performances in The Deer Hunter.

Early on the film Bob Hyde is a very typical gungho marine who has very little depth to him in any respect of his life including his relationship with his wife Sally played by Jane Fonda. Everything is absolutely standard and by the book about Bob and the same is true for Dern's portrayal of him. There is not a hint in his portrayal of anything more to Hyde at the beginning in any respect not even in his relationship with his wife. It is  a fairly standard performance of  this sort. He leaves the impression on you that he needs to but there is no real reason to remember Dern the moment he leaves early in the film. Eventually though Dern does manage to return later on in the film.

Bob is shown on leave where he shows a very changed man from his earlier portrayal of Bob, in that his beliefs of how the war was going to be did not at all match up with the actual realities of his experience. Dern is okay here actually as he shows basically a depression in Bob over being faced with reality. He handles it simply enough but he is effective in showing that Bob really never had his values or idea questioned in such a way before that severely changes his perceptions. His scenes here are quite short, and that don't hold that much power still in the end. When it comes to traumatized vets from 1978 Dern's portrayal just does have anywhere near the same impact as another supporting turn from this year.

Dern's character comes back and again is fine in his portrayal of Bob's disappointments as well as his troubled state. He actually is particularly good in just one scene where he speaks about his injury during the war where he realizes just how much pain and anger Bob has over his experience which so differed from his expectations. The only problem is right after this scene the poor writing involving his character kicks and Dern faces some serious challenges in his role. As I said at the beginning of my review there was only one surprise with Bob to me which was the fact that he told Jon Voight's Luke about the surveillance on him, but unfortunately this contributes to some odd writing where the filmmakers seemed to have no idea how Dern's character should exactly react to his wife's affair.

Bob first seems just sad over it but soon enough he has the far more expected reaction of extreme violent anger. Dern firstly is unable to convincingly convey Bob's random reactions to the affair which leaves his performance in a rather confused place. Dern doesn't really convey a confusion in Bob either, although the film hardly gives him anytime to do much of anything with Bob's feelings since the film seems in a rush to dispose of him. He does get his big scene where he goes crazy and threatens Luke and Sally over the affair. Dern tries his best in the scene giving enough intensity, but the weakness involving the writing hold him back. Than after that it is simply time for him to go nothing more than that. Dern I must say really isn't bad in the role, and is just fine most of the time, but his performance never really frees himself from being the almost disposable plot element his character is.

Very loud performance but the last time I saw him I felt he communicated his character's pain very well. Still, too loud.

I liked him much more than Walken...