Christopher Plummer did not receive an Oscar nomination for portraying Harry Reikle in The Silent Partner. 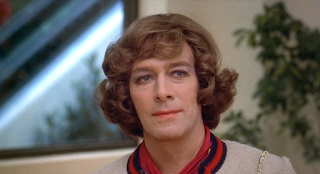 Christopher Plummer, whose film career has been a little random in terms of jumping into the size, scope and quality of parts, perhaps alluding to why stage other stage preferring actors like Paul Scofield and Mark Rylance tended to be a bit more selective. Plummer though in this thriller gets a more than decent sized role, and a chance to show a very different side of himself, from his then most famous film role as Captain von Trapp in The Sound of Music. This as the villain of this thriller, the bank robber, whom bank teller Miles (Elliott Gould) figures out a way to steal from, so in the robbery Miles takes the majority of cash his Reikle would've taken. Technically speaking Miles is the smarter of the two players in this game, but Reikle has an advantage. That being he's a psychopath. Although Plummer is memorable enough as a mall Santa Claus with a far to incisive stare for father Christmas, his greater impression comes when he goes about targeting Miles to get the rest of his theoretical money. This beginning with a phone call and a quiet threat from Reikle, while Miles is trying to romance a co-worker. Plummer's usually quite dignified voice is used here to great effect in being extremely menacing as Reikle notes that Miles is trying to do the woman he is with, what he did to Reikle. Plummer making an immediate sense of a particularly unnerving perversity within that menace. This continues in Plummer's work as Reikle essentially congratulates Miles on his cleverness, which his technically admiring words are delivered in a playful though in turn altogether creepy fashion. Plummer though reinforces always Reikle more direct intention in his eyes that always suggest that real killer's intention for Miles, this being particularly remarkable when he peers through Miles's mailbox with a horrifying gaze.

Plummer effectively sets a stake in place, as Miles finds a way to have Reikle imprisoned, temporarily. The threat though is never gone due to the impact that Plummer makes in those early scenes that show Reikle as someone not to be taken lightly. While in prison though he sends a woman, Elaine, to spy on Miles, though this backfires when she genuinely falls for him. Plummer has a fantastic moment where Elaine falsely reports to Reikle. This as Plummer finds a way to deliver this completely fake charm in his smile towards Elaine, as though he enjoys her in anyway, which he brilliantly subverts in the same moment he loses that falls display as his expression bears a sadistic glint in a matter of a moment. Plummer creating a terrific sense of unpredictability in his own performance, that creates a logic though of Reikle being just a killer at heart, though able to put on some minor airs, if barely, when needed. This as Plummer being an effortless and properly chilling creep. This when Reikle suddenly appears to Elaine, having gotten out of prison early, and makes an instantly tense situation in just the mere way he says "hey" with a vile sleaze. Plummer portraying Reikle as not even putting up any front as a particularly horrible prospect. When Reikle unleashes his real psychosis at Elaine, Plummer doesn't hold back in bringing the extreme sadistic nature of the man, showing both a sense of rage, but also worse this certain pleasure in it all. After this though Miles come to apparently cut a bargain with Reikle to give him the cash through another robbery. Plummer is great once again though by showing that with Miles Reikle still doesn't mind playing games. This delivering this artful flow as when Miles pushes back Plummer pushes the intensity up, but when Miles seems to give in at all, that faux affability comes back to Plummer's voice, as Reikle still wishes to play with his prey. In this penultimate confrontation though there small moment, but I think quite worth mentioning where Reikle questions Elaine's motives, which Miles affirms were devoted to him not Reikle. Plummer's reaction to this though helps to kind of show the effort of this work. This as he takes the time, in this reaction, to convey not exactly humanity, but a sense of real frustration in Reikle, subtle frustration, as he conveys how honestly takes in that information that Elaine wasn't so devoted to him after all. Not as a good person mind you, but still as a person. Of course, Plummer does indeed deliver on the main intention of this role which is to be an intimidating and reprehensible villain. This making his final scene particularly cathartic, amplified by how Plummer plays it. This beginning with a face brimming with smug sat as it appears his plan is going perfectly, until Miles pulls a trick, and Plummer's "aw crap" face is equally satisfying, for us. Plummer making for a proper adversary for our hero in Gould, and the proper force of evil any decent Hitchockian style thriller should have.

I have to say I thought Plummer pulled off that wig extremely well.

Also, to chyme in on Louis' Natalie Portman-Scarlett Johansson comparsion, I always preferred Johansson as well. Before 2019, Portman may have had the greater heights in her career (Leon, Jackie and possibly Black Swan), but Johansson was certainly more consistent, and even her weakest turns weren't all that terrible. Of course with Jojo Rabbit and Marraige Story, Johansson has now bested Portman in that department.

I would think of it this way; Johansson spent a lot of her career stuck with standard, undemanding (and at points, frankly oversexualized) roles, but has finally delivered very strong work in well written parts. Portman, meanwhile, has been offered comparatively better, more interesting characters for years, but has also squandered such roles more than her fair share of times; Case in point, "Closer".

On Johansson, in the past I really couldn't care less about her work, but that changed last year. I didn't love Jojo Rabbit or Marriage Story, but in both she gave some of the best acting I saw last year in both (especially in the latter of the two) and even made hopeful that she would win an Oscar. Hopefully she keeps it up, because right now I'm genuinely curious as to what she does next.

Louis: Your thoughts on the direction of The Raid (2012).

Luke: 1983 NO!
2002 for next; just to see the final results The Lord of the Rings: The Two Towers, Peter Jackson and Bernard Hill.

And what are your final bets of yours?

Anonymous: I concur with Luke.

I’m excited for 1983. What a weird and eclectic bunch of performances and films to be reviewed.

Calvin: Many interesting unresolved topics. Will Louis really like Depardieu for a change, Are Bowie and Pryce (On film, last time I checked he was a five equivalent for GOT) getting their first fives.

So I decided to watch "Victor/Victoria" today, and despite my initial skepticism, I thought it was alright in the end. It definitely could've been trimmed down and not all of the humour/written really worked for me, but it's still a decently enjoyable, lightweight film.

Mitchell: What the hell are you smoking, Warren is the best part of that movie. Preston isn’t far behind.

Well one would assume turning down Gandalf, although I'm inclined to agree with Plummer that he might've not brought that warmth that helped to make McKellen's performance, which at this point does feel definitive for the character. Otherwise though it doesn't seem there were that many obvious misses, and it would be hard to name another actor, maybe George Burns, who managed a resurgence so late in life.

The Raid's direction really is the film, though the script does its job. This as he just turned up the action film to an extreme, that make most seem quite tame and lame by comparison. This in creating multiple fantastic sequences, that are both gritting, yet larger than life at the same time. Whether this be the hallway beat down, the final fight, the hiding in a corridor, Evans just makes brilliant sequences, where every step of it you real feel through such intelligent choices. Again this being such precise use, of a closeup, a long take, what have you to accentuate the combat in each instance in a way that few films have been able to do so. It is a pure action film in the sense where it would work entirely silent as Evans tells the story through that always cohesive and oh so compelling action.

Louis and Luke, although the remake was pointless, would either of you have minded if they had at least expanded Scars role? I haven’t seen it, but from most accounts, it appears they didn’t.

Anonymous: Cutting down Be Prepared was a huge mistake. They should've devoted at least 10 minutes to him as a tyrannical ruler.

Plummer in Nicholas Nickleby is a great overlooked performance