Gene Hackman did not receive an Oscar nomination for portraying Senator Ken Keeley in The Birdcage. 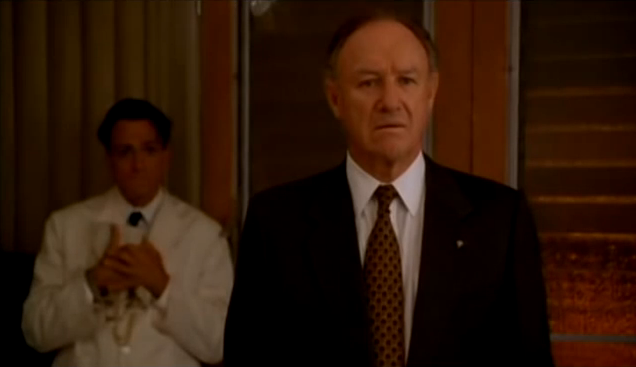 The Birdcage is an enjoyable enough comedy about a gay couple (Robin Williams, Nathan Lane) who try to play it straight to fool their son's fiancee family who are conservative.

Hackman and Dianne Wiest play the parents which are roles that often are rather boring in films like this and only there to look stupid in front of the lively flamboyant leads. Well thankfully that is not the case in this film because the writing actually gives them something to do, but also if you have Gene Hackman in one of the roles it will be far less likely that there will be a comedy deficiency with his role. I have reviewed Hackman before in mostly comic roles like The Royal Tenenbaums and Superman where he excelled without question, but in these were very extroverted roles. Senator Keeley is quite the opposite in that he is not even really required to be funny for the film to work actually.

In the more introverted role though Hackman still is quite hilarious from his first scene where his daughter tells him about her intent to marry going so far to tell him that she has been sleeping with the man for over a year. Hackman starts with hilarity through his perfectly delivered "blahh" and complete disgust at the information. Technically a lot of what Hackman does is just some fairly standard stuff, but Hackman tweaks his performance ever so slightly to make whatever he does very funny. It's hard to get down right to do what exactly Hackman does here as he still could easily transition this performance to a serious portrayal of Senator Ken Keeley. Hackman though knows just how to play every moment to be funny never appearing like he trying to be funny in anyway.

This only continues once the farce starts when they meet gay club owner Armand (Williams) and Albert(Lane), although Lane dresses up as a woman to hide the truth about who they are. Hackman again still keeps Keeley very much in the situation playing believably his positive reactions to Albert in particularly who as a woman espouses basically every view that coincides with Keeley's own. Hackman does not wink yet still is always very amusing because of that particularly in his long and slow monologue about the foliage in America and the purple mountain majesty and such. The whole point of the monologue is that it is suppose to be rather boring to say the least, he gets that point across, but makes the whole ting very funny because of his flawless delivery.

The last thing for Hackman really to do is play the whole revelation of everything which Hackman again plays to great comedic effect through his deadpan confusion at the matter. Hackman really made the movie for me as I easily found him to be the funniest performance even though his effort to be funny seemed the least apparent. Hackman as per usual simply knows how to play every scene just right. He is completely convincing as the senator as he should be fulfilling his whole point in the film incredibly well, but Hackman does not let that just be that. He goes the extra mile giving a very entertaining performance as well, proving himself capable on the more introverted side of comedy, and also stealing film right out from under the noses of the more flamboyant performances found in the ensemble.

I personally thought Nathan Lane was a riot in this, but I agree with all of your thoughts on Hackman.

Louis: ratings & thoughts on the cast.

Can you pleas review his Get Shorty performance for 95 supporting. That performance is much funnier than this one.

This is off topic Louis, but yesterday Top Gear was on, and since it was somewhat a tribute to Bridge On The River Kwai, I wonder if you have seen Sessue Hayakawa in much or tryed to, since he seemed to be hugely popular back in the day, probably the first big Japanese film star (you should see him when he was younger, he looks like a classic star lol)

Could somebody point me in the direction of the post where Louis listed his female 5s of the 2000s? I know it was relatively recently but am having trouble finding it.

Michael Patison: I asked this question before on the James Mason/Seventh Veil page and this is the response I got back from Louis. Also he hasn't seen every supposedly great female performance from this decade.

Thank you very much, Luke.

I hate writing every rating of Louis's I might care about in the future down so then I ask these questions about a specific performance that he's already answered or I have to ask for reference to what I'm looking for.

I must find a way to remedy this problem.

I'd also just love to know all of the female performances (not just since 2000) you'd give 5s to. I know that's probably a lot, so I'm not looking for any immediate response, thought I'm certainly not averse to it. If you wanted to do it in chunks, like by decade or something, that'd be fine too. I'm just very interested to see what you think. Thus far, I either remember you explicitly saying (or I implied) that you'd give the following performances 5s:
-Claudette Colbert in It Happened One Night
-Irene Dunne in The Awful Truth
-Vivien Leigh in Gone with the Wind
-Joan Fontaine in Rebecca
-Teresa Wright in Shadow of a Doubt
-Celia Johnson in Brief Encounter
-Ingrid Bergman in Notorious
-Vivien Leigh in A Streetcar Named Desire
-Anne Bancroft in The Graduate
-Faye Dunaway in Bonnie and Clyde
-Cloris Leachman in The Last Picture Show
-Faye Dunaway in Chinatown
-Faye Dunaway in Network
-Angela Lansbury in Death on the Nile
-Mary Tyler Moore in Ordinary People
-Jessica Tandy in Driving Miss Daisy
-Sigourney Weaver in Alien 3
-Holly Hunter in The Piano
-Brenda Blethyn in Secrets & Lies
-Frances McDormand in Fargo
-the 2000s-present already listed in this thread
If any of these are wrong, please point them out.

I just saw tht you changed your ranking of 2013 supporting actor and given the win to Abdi an guess what - I saw "Dallas Buyers Club" today I have idenctical ranking for 2013 supporting :D

Azaria - 2.5(I don't know if I've ever liked him outside of The Simpsons. He's over the top, which would be fine if he was really funny but I did not find him that entertaining)

Williams - 3(I only really like Williams when he's either playing a mentally disturbed man or doing basically a pure stand up routine. He's fine but I found him mostly forgettable)

Lane - 3.5(Over the top as well but he's pretty entertaining while being rather endearing)

RatedRStar: The only other Hayakawa performance I have seen is Three Came Home where he was also very good in a similar albeit more sane role to Kwai. He's definitely someone I want to see more of.

Michael: I would give all those performances a 5.