Pete Postlethwaite did not receive an Oscar nomination for portraying Danny in Brassed Off. 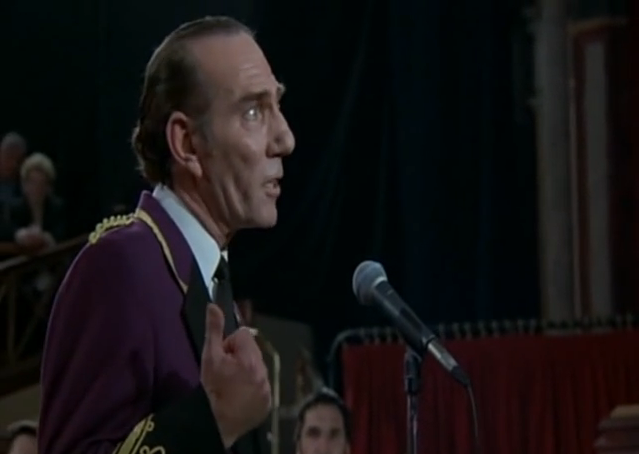 Brassed Off is a good enough film about a coal miner brass band that is threatened by mine closure. Although don't let the adds fool you it is far far more drama than comedy.

Postlethwaite was actually in six films in 1996 including his best of show performance in Romeo + Juliet, and his enjoyable if over the top portrayal of a monk who is a wannabe poet in Dragonheart. I actually have not seen all of the films, but Postlethwaite was one of the most consistent character actors of 90's and one of the best examples of his talent was in this film. Postlethwaite plays the conductor of the band who is the largest source of comedy for most of the film as his character Danny seems far more interested in the success of the band than the success of the mine. Although many of the men are pretty cynical of the whole thing that will not be found in Danny especially not in the way Postlethwaite plays the part.

Postlethwaite makes Danny a source of comedic gold through his completely no nonsense performance actually. In any of the band scenes Postlethwaite is absolutely hilarious because of just how dead serious he is as he conducts the band. This is not just some sort of mundane task or even an extra activity for fun this is the most important business of life in the way Postlethwaite performs the part. There is nothing but the utmost determination in his work that works in two ways. One he does make it genuine that Danny feels this way as the band is a matter of pride, but it is also very funny because he so believably shows a man who is so deadly serious about something that most don't really care too much about.

Postlethwaite's seriousness only continues to be effective though in some great moments earlier on the film where there are some double entendre  moments in the dialogue. Really these moments could have fallen ridiculously flat in just the pitch of them but the reason they work so well is because of Postlethwaite. In one moment the jealous wives of other band members question the inclusion of the only young female player. Everything the women imply about her is in a most sexual fashion, but Postlethewaite makes it funny because every response by Danny is slightly bewildered yet completely firm on the fact that she simply is very talented. Really there probably would not be many laughs at all if it were not for Postlethewaite's stone faced delivery.

Of course the laughs rather abruptly stop in the film once the mine actually closes and old Danny even collapses from a mine related illness. This quickly leads Danny into a change of heart as he finally values people more than the band. This is a fast transition but handled well by Postlethwaite in a scene of reflection as the band plays just for him, then his important final speech after the band successfully won a national competition. The film itself really does hammer in its message like ten too many times since it does just keep saying the things over and over again instead maybe doing a little more with the characters.

The final time the film's message is given though, other than one more printed message, is in the speech by Danny. It's the best moment for it's message because Postlethwaite is the one delivering it. He just brings such a intense passion in his delivery that he gives the film a powerful bang at the end that has nothing to do with any brass instrument. This is a very good performance from Pete Postlethwaite as he brings such an abundance of humor to the first well about eighty percent of his performance, many actors may have not been able to bridge the transition. Postlethwaite, with the little time he has, manages to connect the two sides and give an emotionally poignant performance as well.

Louis: ratings & thoughts on the rest of the cast.

McGregor - 3(Seems mostly there because they wanted someone young. He's good though although a very limited fashion)

Fitzgerald - 3.5(Much like McGregor but with a little more to do and with that she does create the appropriate conflict within her character)

Tompkinson - 3.5(As a character I feel he is a bit overexposed as every scene with him tries extremely hard to be such an intense tear jerker. This includes tragic scenes with him dressed as clown which the film uses too many times, and eventually comes off as a cheap trick because of it. Even with all that his performance is raw bit of emotional work that is indeed a solid bit of acting)

Basically everyone else is a solid three. They fulfill their individual colorful character traits well enough although none of them breakout the way Postlethwaite does.

I thought Postlethwaite completely knocked that last speech out of the part. I also had no idea until I saw this movie that the little intro to Tubthumping by Chumbawamba was this speech haha.

Hey Louis, can I have your ratings and thoughts on the supporting cast for Tinker Tailor Soldier Spy, excluding Strong?

Hardy - 4.5(He differentiates himself from the rest of the cast with much more lively performance which works perfectly in showing his character's more optimistic outlook fitting to his character who just has not been around long enough to become completely cynical. The last image of him in the rain is absolutely heartbreaking)

Hurt - 4.5(A short performance but that's all that Hurt needs to make his impact on the film. In his little time he gives us a vivid depiction of the old guard who keeps himself far more self contained. Like Oldman he is excellent by showing the little cracks where the emotions come threw)

Burke - 3.5(Enjoyably cheeky, but with the right desperation of someone who has withered away in a low level position in The Circus)

Cumberbatch - 4(Does well to be a slightly more enthusiastic and energetic presence as the most active spy in the film. Cumberbatch makes him knowledgeable of his life, but nicely adds some more emotion in the proceedings without going overboard. I particularly love his well earned smile at the end of the film)

Firth - 4(He's a great cad for most of it combining his cheekiness with still the right suggestions of the spy underneath. His best moments though are his completely silent exchanges with Strong which are among the best moments in the film)

Jones - 3.5(Slightly limited in the scheme of things but he does pompous very well.)

Dencik - 3.5(He's serviceable for the most of it, but he's actually pretty moving in his breakdown on the airstrip)

Hinds - 3(He's good in his short speech about need for the cash for the Circus, but otherwise he's very underused. Although the mere presence of his face adds something to this film)

=D I thought the best scene for Cumberbatch was when he leaves his lover, his quiet reaction was heartbreaking =).