Leonard DiCaprio did not receive an Oscar nomination for portraying Romeo in Romeo and Juliet. 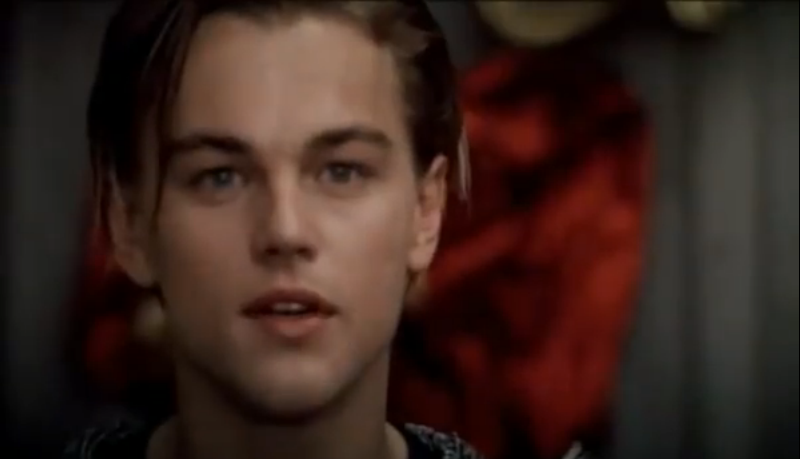 Well making my rather hasty change from the disqualified Philip Baker Hall in Hard Eight to DiCaprio, I must now watch film, I mean what's the worst that could happen.....having watched it aaaaaaaaaaaaahhhhhhhhhhhhhhhhh why didn't I do Day-Lewis in the Crucible.....sob...sob. Anyway I did not like it. I did not like it one bit, you could say I hated it hated it a lot from that opening TV broadcast followed by Baz Luhrmann's choice to zoom in and then zoom out over and over again, because if you do it several times it makes it less annoying, no wait no it doesn't. Then I noticed that Luhrmann decided to shoot it like an over the top comedy, except it's not remotely funny, which is a bit of problem.

What about the acting though, well ...... Well the film chooses to keep with the Bard's original words for the most part. The words of Shakespeare here are often treated like taking a symphony by Beethoven and play through poorly tuned instruments, or maybe cooking a great recipe with stale foodstuffs. Well many of the actors are bordering on causing rapid ear bleeding with their butchering of the words, that would be ill fitting even in a thirty second comedy bit. There is some relief found in the Friar Laurence equivalent Father Lawrence played by one of the best character actors of the 90's Pete Postlethwaite who understands the words, but even modernizes his technique slightly yet smoothly. That is not the case for any other actor really, but luckily for DiCaprio though he is not one of the instruments that is completely out of tune.

DiCaprio really does not have the language down and it does undercut every scene he is in to at least some degree. The film is fundamentally wrong when the language cuts down any emotion rather than ever amplify it. That is not all that undercuts his performance though as there is consistently Luhrmann's obnoxious gimmicky direction in every scene such a turning Mercutio's death apparently into an upcoming apocalypse or putting a cheesy 90's love song in every love scene between Romeo and Juliet. No matter what even if DiCaprio were to do something right Luhrmann would not really make any use of it anyway. This basically is almost a pointless endeavor by Leonardo DiCaprio, but to be fair in terms of when you think of a Romeo DiCaprio definitely is someone who fits the bill.

DiCaprio isn't really bad here, his delivery of the monologues is rather rusty but not terrible. He is enthusiastic in his performance and his very emotional style of performance is not wrong for Romeo as I think a necessary to show the fact that Romeo does not really think things out to much. With all that is against him though it hardly is able to produce much of anything no matter how much passion he does put in it. DiCaprio throws himself into being Romeo for sure, and I appreciate that effort he obviously shows throughout but never has so much passion meant so little for me. Romeo as a character is no Hamlet to be sure, and all you really need is some charm and that passion for him to fulfill the need of the part. DiCaprio does perhaps do this, but I never saw it through Luhrmann's direction.

Louis: ratings & thoughts for the rest of the cast.

Lastly, your rating & thoughts on Olivia Hussey in the Zeffirelli version and I would like to ask on who would be your ideal casting choices for Romeo, Juliet, Mercutio, Tybalt and Friar Lawrence.

The worst performance for me was John Leguizamo who has always been a shit actor in anything his in.


Rant Time
=D why the fuck is everybody wearing hawaiian shirts. and why does everybody have Devil May Cry style guns lol, and why is Jamie Kennedy in this movie, Baz Luhrmann all I have to say to you is, you are my new personal enemy, prepare to eat liquid shit.

Is there anybody on this blog who likes this film, anybody at all.

RatedRStar: I'm a bit guilty for liking the film initially, although only on it's production values, but now:

It was so bad. So so bad. This review made my day. I also agree that Postlethwaite actually kind of overcame the shittiness of the film in general.

Yeah, I agree with absolutely none of this...but to each his own.

Dennehy - 2(Really does not do much of anything)

Margolyes - 2.5(Better than most of the cast, but I still did not feel she could escape the direction)

Perrineau - 1.5(Mercutio as a sorta drag queen did not work for me one bit and he botched the death scene)

Danes - 2.5(You get her now famous cry face, but I thought she did very similarly to DiCaprio. Not bad at all with the right passion in the part, but undercut by Luhrmann)

Postlethwaite - 3.5(The only saving grace in the film for me and the only one who could actually get some genuine emotion past Luhrmann)

Hussey - 4(It's a pretty lovely and charming performance for the first half, and when the tragedy strikes in the story her performance does not falter)

I think the 68 one is pretty impeccably cast actually. I know I was not crazy about Whiting, but he was well cast, and his performance just about up to snuff. Casting it is difficult because you need the combination of youth and talent which is not always easily found.

=D wow arent even defend ya film that ya like eh? lol cause theres nothing to defend lol.

I would be interested in what you liked about it Fisti?

The problem is with this film is that its not even funny or anything, its so humourless, and far too serious on everything, and some of these little tics and tacs that Baz puts in just dont make any sense, like why does Mercutio curse both the families (Romeos as well), even though he was close friends with Romeo, why would he do that, its just stupid.

Mercutio cursing them both is in the book, but its so over the top, and the acting suckssssss.

Now you HAVE to see the Ethan Hawke Hamlet to see this sort of experiment pay off. Also, yeah, Postlethwaite is the only one without egg on his face.

I agree that Postlethwaite was good here, I was referring to this barage of 'this movie sucks' going on here, but Baz does have passionate haters, so it makes sense.

I understand that this film is not everyone's cup of tea, but I felt that Baz's sense of style and manipulation worked perfectly within the context of the storyline. He modernized it without taking it out of it's Shakespearean roots and he found ways to make it feel vibrant and gritty while maintaining a true sense of beauty.

I mean, the party scene and the fishtank meeting is one of the most beautiful sequences in film of the 90's.

For me, the whole point of the film was to take it to the MTV generation. That is what the 90's were all about, and unlike Hawke's Hamlet (which was just stilted and uninteresting), Baz made Romeo + Juliet feel fresh. It felt like HIS movie and not some dusty remake of a classic. He breathed a new life into it.

I felt that all the actors worked well with the dialog, which was not a hindrance at all because the entire cast had such convictions.

DiCaprio and Danes proved their weight as stars here and were extremely inspired casting for these familiar roles. Their chemistry was insanely good.

Louis sorry for bringing this up now but for supporting actor 1996 can you do Gene Hackman in The Birdcage?

Never seen it, but have seen clips of this and the 68 version and the 68 version feels more effective from my viewings. It's good to have a new vision with things, but sometimes it doesn't work, at least that's what I gathered from the clips and reading your review.

I take it you're a big Shakespeare fan?

What do you think of Strictly Balrrom, Moulin Rouge, and The Great Gatsby?

Anonymous: He'll certainly be in consideration.

Joe: I have not seen Ballroom or Gatsby. Moulin Rouge gave me a headache.

It appears that Baz is not your style, which makes this grade/rating/assessment make more sense.

I think it was a good movie