Ewan McGregor did not receive an Oscar nomination for portraying Renton in Trainspotting. 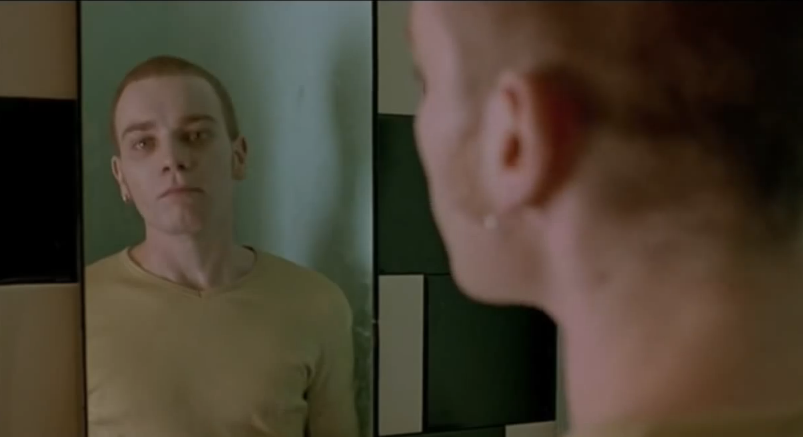 Trainspotting is about a group of friends in around the Edinburgh drug scene. Although I am not a huge fan of Danny Boyle I found his kinetic style worked here and found the film an entertaining ride.

The always reliable Ewan McGregor made his breakout with his role here as Renton a heroine addict who we follow through his lowly existence along with his group of friends who are addicts of one sort or another. Just like in the later adaptation of Irvine Welsh novel Filth, Trainspotting also employs frequent narration by its hero, and again with a very earthy tone to it. Renton though is a considerably less complex individual than Bruce Robertson, as Renton life at the beginning of the film consists very little more than getting high and spending some time with his friends doing nothing. Honestly Renton could be a disposable enough character really if it were not for the fact that McGregor is the one to play him.

McGregor has a natural magnetism in him, and he is able to create an investment in a character like Renton even if he may not be worthy of it. Although Renton lives an undeniably dour lifestyle it never feels that way because of McGregor's portrayal of him as well as the humorously cynical narration that he delivers during the course of the story. McGregor wit his performance never falls into the depression potential of his character always bringing a certain energy to any moment he may be in never allowing any scene to fall the wrong way. Even though he may not be deserving of it McGregor is able to make Renton considerably endearing through his own charisma as a performer.

Renton undergoes some changes throughout the film though most considerably when his parents force him to undergo cold turkey withdrawal, when earlier he took a very specific process to kick the habit. McGregor is terrific in the cold turkey scene and the intensity of his performance is absolutely fitting to the imagery that Boyle creates around him. The scene perhaps could have merely become an exercise in the style of the grotesque, but McGregor does not allow that to happen by showing the very real pain that Renton undergoes as he suffers every thing that the absence of the drug is doing to his body. It is brilliantly acted scene by McGregor, and he makes Renton's turn to make something out of himself wholly believable.

For the rest of the film Renton takes a reactionary role, although with the occasional slight relapse, as he tries to deal with friends who have not at all reformed. McGregor is effective in portrayal of the slowly growing exasperation at the increasingly troublesome behavior of his friends particularly from the alcoholic and violent Begbie (Robert Carlyle). Although McGregor by this point technically becomes the far less volatile presence in the film, and it would have been easy enough to be forgotten behind the nature of Carlyle's intense performance. McGregor performance always remains compelling, and his depiction of Renton's growing responsibility is honest and fitting to the character.

It is easy to see why this was McGregor break through as it is the indication of McGregor's abilities in limited roles, which he would again show later on in Moulin Rouge and The Ghost Writer. Renton is not a poorly written character by any means, he absolutely works for the story, but he is mostly of defined by what he does rather who he is exactly. McGregor proves his measure with that traditionally known star quality with his work here. His strong screen presence is always prevalent here, he strikes the right tone with his performance fitting to the material, and whenever there is a challenge like the the withdrawal scene McGregor is more than up to it.

Louis: Ratings & Thoughts for the rest of the cast.

Also, have you seen The Grand Budapest Hotel yet or will you be waiting till the end of the year to see it.

I've always liked him in most things I see, though I haven't seen him in this one. Do you think he was cast well in August Osage County? Because that was the only time I thought he was really miscast, I think he was too young for the part and he wasn't believable as Julia Robert's husband.

I hope you review Kevin McKidd, who I thought was great despite the script's limitations later in his screentime. Contrary to what I can tell from contemporary reviews, I found Robert Carlyle to be too over the top half the time.

Louis what are your ratings and thoughts on the cast of The Girl with the Dragon Tattoo?

Lee Miller - 3.5(Does the more controlled junkie, and I found his delivery of the ramblings on Sean Connery particularly funny)

Macdonald - 3.5(Small role but I found her portrayal of the over eager teen pretty enjoyable)

Joe: I do think he was miscast there as he and Cumberbatch just did not fit in with the rest of the ensemble. I did not think he was bad there, but I agree he did not seem right as Roberts's husband. Also seemed like there should have been more to his character.

Craig - 3.5(Doesn't even try accent but I thought he gave a solid enough straight leading performance)

Plummer - 3.5(I thought he offered some nice warmth in the otherwise very frigid atmosphere)

Skarsgard - 3.5(Bad casting in that it sure made the mystery easy to solve, but Skarsgard does vicious evil well)

Wageningen - 3(Handles his few scenes with the appropriate extreme sleaze)

Mara - 3.5(I certainly could use a re-watch of her. I thought she had charisma and a ferocity, but I always felt I was watching her performance)

I'd rather that Craig not bother with the accent than try and completely fail, personally. Also, on Mara, I liked her more than you, but I thought she had a LOT of help from Fincher's direction.

I liked Mara A HELLA LOT more than you two. She's my win in a complete landslide.

koook: When I say I liked Mara more than Louis, I liked her A LOT more. I'd give a very strong 4.5.

There is Louis, but those scenes were cut. You should read the play, it's amazing!