James Mason did not receive an Oscar nomination for portraying Nicholas in The Seventh Veil. 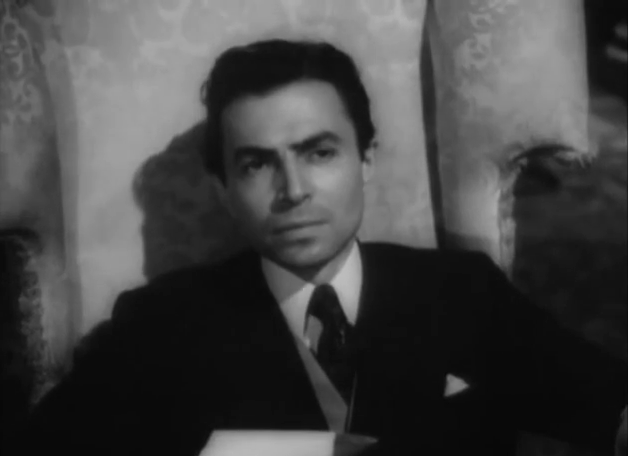 The Seventh Veil is a decent enough film about the life of a suicidal pianist Francesca (Ann Todd), although the ending is certainly more than a little questionable.

Ann Todd was not much of an actress as there never seems to be much of a drive in her performances rather she often seemed quite content just to kind of be there. Luckily this does mean she would usually not be actively bad so to speak, and if there was a great performance around her she definitely would let that performance flow freely. That was certainly true for Claude Rains in The Passionate Friends, and here in this film we have the other Mr. Jordan, James Mason. Mason is only barely lead in this film and if one were to put him in supporting I would not raise much of argument. Nevertheless Mason has the second largest role in the film as the second cousin and legal guardian of Todd's Francesca.

Nicholas is a bitter man who who has a limp and seems to not care for much of anyone Francesca included. Although Mason wasn't particularly old at the time that never comes into play though as Mason makes Nicholas's palatable from the instance he is on screen. Nicholas is not a villain so to speak as he's more of a colossal jerk. Mason is one of my favorite actors though because of how he is able to enliven any scene he is in with his mere presence which he definitely does here. Many scenes require Mason just to come in and say a few cold dismissive words, really Nicholas could have been pretty forgettable, but Mason delivers every line with such an fierce cynicism that you can feel Nicholas's hatred toward the world as almost an underlying element in the film in every scene.

Nicholas is not all bad though as he finds that Francesca has a talent for the piano something he also knows although only well enough to be a teacher to Francesca. Mason is good in these scenes as well because he really does not lighten up still carrying that intensity as Nicholas just been bitter for too long to ever truly be happy. Mason does adjust his performance every so slightly to accentuate the passion that Nicholas does have for the piano, although even that he mostly hides in his fierce hatred of all things. Mason creates the right dynamic though to show how Nicholas would pressure Francesca to become a better pianist yet still never comes even close to becoming a good mentor. Nicholas always remains a pretty bad mentor and that is really part of the fun with Mason's performance.

I probably would not have said the film was decent enough if it were not for Mason's somewhat infrequent appearances in the film as he really does make the movie with his portrayal of Nicholas. He completely asserts himself  in terms of meeting the demands of the role which is to show how Nicholas could drive Francesca to suicide. Mason definitely brings the needed viciousness and coldness to show this, but he does manage to more than that in his usual Mason way as it is quite entertaining to watch him perform in the scene. My favorite of his being when Francesca tells Nicholas she is being married and Nicholas cuts her down by completely ignoring her. Mason is so brilliantly precise in the moment that even in seeming ignorance can Nicholas seem brutal in his coldness.

It definitely would have been nice if the film had been about Nicholas, or if the film had frankly spent much more time in creating the teacher student dynamic rather than rushing through it then there probably would have been potential for a truly great performance from James Mason. Mason unfortunately only has so much to work with here as Nicholas is both a bit underwritten and underused throughout the film, and this becomes exceedingly noticeable with the ending of the film when out of nowhere they decide Nicholas and Francesca were meant for each. Now Mason handles the final scene well naturally inserting just a little bit of regret within the bitter man, but he hardly could make that ludicrous revelation work. This is still very compelling work from Mason, and I do think the whole film would have been disposable if it were not for him.

Luois , another Question about the 1991 Supporting Actor. What are your ratings for Ice Cube and Gooding in boys in the hood and your reasons? Also why do you hafvge Gooding in Supporting?

Also your rating and thoughts on Robert Patrick in T2?

Louis: your thoughts on Thor: The Dark World, as well as your ratings & thoughts on Chris Hemsworth & Tom Hiddleston.

Ice Cube - 4.5 (He's very good here bringing across how the violence settle into his character almost as a daze, and there is real emotional poignancy he brings to the final scenes when he finally portrays his character reflecting on what has happened)

Gooding Jr. - 3.5 (I put him supporting as I do feel it is an ensemble piece as it gives to the three guys as well as their parents. If there is a lead it is him, but I do feel he's supporting still. Gooding is good here as he avoid the overacting he would later become known for. I do he is often overshadowed in the film by Fishburne and Ice Cube)

Patrick's a 4.5 and I've given my thoughts on him before.

Luke: Marvel has basically has a formula down now to make at least decent super hero movies. This was a decent one and I preferred over some of their other decent ones.

Hemsworth - 3(Again he is Thor, but again Thor's just not that interesting of a character)

Hiddleston - 4(Basically was there to show off, and he certainly earned his right with his very entertaining performance that completely overshadowed everyone else in the film)

What are your thoughts and ratings on Nicole Kidman, Paul Bettany and James Caan in Dogville?

Honestly do not remember your thoughts on Patrick. I have not been here long.

I take it that you did not like Chestnut at all in Boyz in the hood?

Again I really haven't seen many of the film that are said to contain some of the best performances by women in the decade. For example Dogville is the only Lars Von Trier film that I have seen.

Hey Louis, just a random question, but who is your favourite action hero out of Bruce Willis, Stallone and Schwarzenegger?

Also, what did you think were their respective best performances?

Also, what are your thoughts on Mulholland Drive, as well as your ratings and thoughts for the cast?

Louis: Can I have thoughts on all that you've listed, except Nicole Kidman.

1. Willis (Die Hard, although there is another performance of his that is perhaps greater, but I might be reviewing him for that one)

Although when not trying Willis is a definite third as he becomes obnoxious, where is the other two can be enjoyable in at least some way or another.

Mulholland Drive is one of the greatest directorial achievements of all time. I have to give Lynch particular credit for the Winkies scene as he actually makes it feel that you are experiencing a nightmare first hand.

Herring - 4.5(Slightly overshadowed by Watts but she also gives a striking portrayal of her character's paranoid state)

Miranda Richardson in Spider (Fascinating portrayal of the two sides of the same person, and she actually allows into the mind of Spider as Fiennes's performance does.)

Emily Watson in The Proposition (She has a great unassuming yet poignant chemistry with Winstone, and she creates a very interesting depiction of someone overwhelmed by her life yet so proper that she represses almost all of it)

Cate Blanchett in I'm Not There (Her casting could have just been a gimmick, but she becomes Dylan, and she makes you forget that it is even a gender bending performance)

Naomi Watts in Mulholland Drive (A very stylized work that absolutely works in perfect tandem with the world Lynch creates. It's a stunning piece of work that is completely captivating to watch)

Charlize Theron in Monster (A very haunting work where she always simply is Wuornos, and realizes the truly damaged psyche of her so well)

Uma Thurman in Kill Bill vol 2 (Builds upon her earlier more action orientated performance from the first one. She still carries herself as the right type of vengeance, but with a greater emotional impact this time. She also is particularly good in the flashback scenes in creating the less world weary Bride)

Jennifer Lawrence in Winter's Bone (I certainly wish she would go back to performances like this but oh well. Anyway Lawrence gives a powerful wholly naturalistic portrayal of her character's determination, but she goes even further in key moments where she does reveal a vulnerability that is fitting to someone of her age)

Louis, are there any cast members of I'm Not There that you think you might be reviewing? If so, you don't have to say who they are now if you don't want to.

Luke: 3.5 (It's really a one scene performance and the power overall comes from all his performances together. By itself though Rickman's work is definitely rather moving in that one scene)

Bettany - 4.5(An interesting performance in that he kind of plays it like an enthusiastic lead from a 40's film. It really works well for the part, and makes the slow revelation of his true nature properly disconcerting)

Anonymous: Here's my old comment (Patrick brings the right efficiency to his portrayal of both the android's unemotional intensity as well as the false emotions it uses as camouflage at times.)