Alternate Best Actor 1945: Cornel Wilde in Leave Her to Heaven

Cornel Wilde did not receive an Oscar nomination for portraying Richard Harland in Leave Her to Heaven. 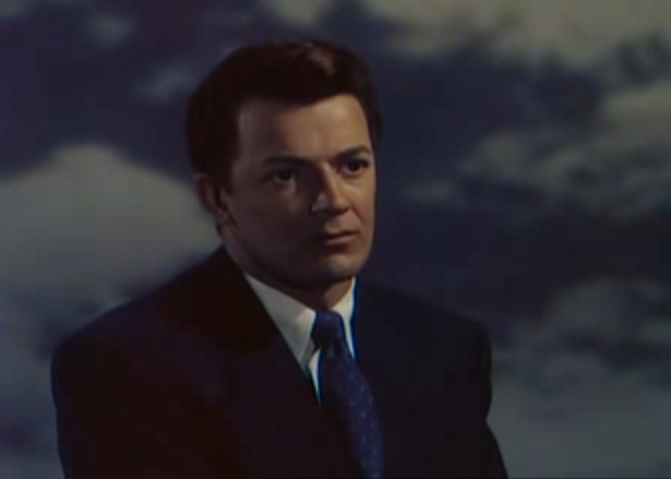 Leave Her to Heaven is an effective film about a man whose life and those around him seemed threatened by a woman obsessed with him.

Cornel Wilde was indeed nominated for Best Actor in 1945 for A Song to Remember (which was forgettable, rim shot please). Anyway his performance was dullness incarnate and all the life seemed to be sucked out of Frederic Chopin. One could perhaps attach this to Charles Vidor's direction who also went on to suck out the life from Franz Liszt and Dirk Bogarde in A Song Without End (which felt endless). Well there is no Charles Vidor around this time so no accusations of soul stealing can be made. Well Wilde proves himself not to be some hollow shell here giving a considerably better performance than his performance as Chopin which naturally means the it's the one the Academy doesn't nominate, but I suppose that's just how it goes

The part of Richard Harland is a fairly simple one early on in the film as he meets with the mysterious woman Ellen (Gene Tierney) who instantly grows strong attracted to him, and even forces a proposal on him. Now this might be some cause to step back for a moment, but since she looks like Gene Tierney it's pretty easy to understand Richard's lack of hesitation.Wilde mostly on just needs to make us invest into Richard's story. Wilde's does do this as he he is appropriately endearing and charming in the role. There is not anything particularly special about Richard, but there is not anything wrong with him he just is a nice guy who cares about those around him particularly his handicap brother. Wilde brings the right enthusiasm and energy into the role that sets up Richard very nicely to make his fall have the right impact.

Wilde does not play Richard as some sort of fool though and he is very good in his scenes with Tierney. They don't have the usual type of romantic chemistry but they really should not as this is not a normal romance in any way. Instead she seems completely entranced by his appearance as she notes that he reminds her of her father, which again is creepy enough all by its lonesome but Wilde makes it work by the way he plays his affections back. Wilde does not necessary really show that Richard is in love with her exactly, but rather is mutually entranced by her appearance although this time in a more basic sort of way. Wilde takes the right approach in doing so and he makes it believable that he would take so long to catch on as he helps create the allure of Ellen through his own performance that reinforces it.

Wilde is good in the earlier scenes fulfilling the part of Richard well, although Richard purposefully does not make too much of an impact overall as the film focuses on the insanity of Ellen's desires. This changes though when Richard finally finds out about some of Ellen's actions which even includes causing the death of someone. Wilde is very effective in his confrontation scene as he personifies the moral outrage in Richard with the proper ferocity. His best scene though comes after further developments and he has to end all speculation with a court room testimony. Wilde's is fantastic in his delivery of the final monologue bringing the right passion of his resolve to defeat Ellen's plan, but as well Wilde  brings a very powerful haunted quality within it that properly suggests how the whole affair has left Richard.

Well as usual you can leave it to the academy to make such a foolish mistake as nominating Wilde for A Song to Remember instead of this it is even more questionable when the nominations so that they indeed had watched Leave Her to Heaven. If they had not only would they have given Ray Milland, but they also would have made Wilde one of the better nominees for Best Actor rather than one of the worst. For my rating this time I have to basically average out things. He is about a 3.5 for most of the film but he brings the right life to the part and allows us to easily sympathize with Richard's dilemma but then in the end of the film when he finally gets the opportunity to completely soar he absolutely seizes that opportunity that would make him almost worthy of a five.

I really liked the cinematography, some early colour films always had this rather strange grainy look to it. I thought Gene Tierney kind of overshadowed Wilde a little bit in my opinion.

Like most Hong Kong films that I have seen it looks visually compelling at the very least.

Louis, ratings and thoughts on these performances, please?

Hey Louis, can I have your ratings and thoughts for Michelle Monaghan in Kiss Kiss, Bang Bang, Meryl Streep and Amy Adams in Doubt, and Joel Edgerton and Guy Pearce in Animal Kingdom?

Lloyd - 3.5(A good performance as usual by Lloyd with the right chemistry with Julia, but I do feel he unfortunately is saddled with moving forward what is the least interesting part of that film which is the plot. And yes the Addams Family is perfectly cast)

Hedaya - 4.5(He does sleaze very well here for most of his performance, but is also great in that dream sequence where he is surprisingly moving)

McDormand - 3(She is fine as a fairly bland character, but she is overshadowed by Hedaya and Walsh)

Ruffalo - 3(He's good in his couple of scene in a fairly standard role, but my favorite out of the unquestionably supporting players would be Javier Bardem's one scene work)

Lillard - 2.5(Well I'll give him credit he definitely just is Shaggy. The film unfortunately is too poorly written for him to really make much use of that though.

Monaghan - 4.5(Extremely entertaining and endearing work that works wonderfully well with the performances of Downey and Kilmer)

Streep - 2.5(It is not that she goes to far necessarily, but Streep's way of going over the top feels too much like a performance. That might even be fine but in the moments where she should pull back a bit she still stays loud making it so you can't really argue that it's a purposeful performance of the Mother Superior)

Adams - 4.5(The best performance in the film. She does her cheery Adams performance here which she actually is very good at, and it works well for her character her. She also appropriately takes the cheeriness down naturally as her character loses her naivety)

Edgerton - 4(Short but important performance. He makes it so the crime life looks cool with his rather smooth portrayal of a criminal)

Pearce - 4(A nice unassuming bit of work by Pearce offering one of the few honest faces of compassion in the film, and his genuine performance contrasts particularly well with Weaver's devious turn)