Sterling Hayden did not receive an Oscar nomination for portraying General Jack Ripper in Dr. Strangelove. 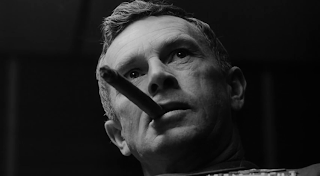 It could easily appear to some that Sterling Hayden really did not care about acting, and his personal comments would seem to support that statement, nevertheless he had a tremendous screen presence, and it did seem like he could fit into the tough guy roles like no other. That does not seem entirely fair to Hayden though because, for example, in his role in the Asphalt Jungle most of the type he just needed to be the hard man yet when more was asked of him he actually did succeed in being more than just the thug. Hayden in Dr. Strangelove again seems to be properly cast as the hard nosed General who decides to have his bombers, which are armed with nuclear weapons, to attack Russia completely based only his own authority and not the president's.

In the most base sense Hayden fits the role perfectly with his deep voice and simply his size of the man that this would be guy who would not mind intiating such a plan on his own personal authority. Hayden makes Ripper the obvious example of military might and the thinking of a man who believes himself to be in complete command of the situation. In the most serious sort of way Hayden fulfills the purpose of General Ripper, by being a man who is clearly determined in his plan no matter what the consequences will be in the end. Of course this role and Hayden's performance has much more to offer than simply being a determined military general, as the true nature of this role is not dramatic but in actuality it is comedic.

Hayden is brilliant in regard to making this a hilarious performance. The great part about Hayden's performance is he doesn't play it straight nor does he seem like he is playing it as funny either. Hayden does so much within the structure of Ripper it is amazing. As Ripper he is always chomping hard on his large cigar throughout his performance, and he has a most crazy eyed look on his face. There is something so intense about his look that it is both hilarious yet as well works in portraying the insanity of Ripper. This goes for almost everything he does as Hayden is so extreme about it that he makes what he does amusing yet he is strangely believable at just being a purely crazed war hungry General as well.

The best part of Hayden's performance though his his bizarre yet so perfect chemistry with Peter Sellers as Ripper's sane second in command Lionel Mandrake. Although Mandrake the whole time is trying to stop Ripper, Ripper never figures this out revealing much of his plan to Mandrake. Hayden is rather warm and almost fatherly toward Mandrake throughout the event making a real camaraderie there even though Mandrake is trying to undermine him the entire time. Hayden having Ripper seem so comfortable rather than hostile when talking to Mandrake makes the situation all the funnier as Mandrake tries to find something out while Ripper is in a world of his own.

The reason for Ripper's plan is the most ridiculous part of his character as he reveals that he believes the communists are after his precious bodily fluids because he apparently knows nothing about the way the human body works. Hayden brings so much conviction to this lunacy with his stone cold delivery that he makes the scene as memorable as it is, and makes it seem perfect sense to General Ripper anyway. Although I am sure that is many a fan's favorite scene for Ripper, my personal favorite is when Ripper asks Mandrake about torture. Hayden's performance is extremely funny as he keeps that psychotic look, but within that look you can see him basically wimping out at the idea of any physical torture.

Hayden proves himself far more capable actor than one who is just good at fulfilling a certain physical type of character with his performance in Dr. Strangelove. It is quite true that Hayden successfully fulfills General Ripper in the basic description of an imposing General, but more than that he turns his depiction of a General out of his gourd into a comedic gold. Hayden gives a great performance that pulls off a most interesting trick which is to not pigeonhole himself as really playing it exactly one way or another. Sterling Hayden by taking this most unique path gives a completely fitting portrait of a man who very much has created his own form of reality within his deranged mind.

I wasn't entirely as impressed by him in The Asphalt Jungle as others seemed to be, but I absolutely loved him in this. I personally would rank him above Scott because this role is a little bit more of a departure for Hayden than Scott's was for him, but I figured that wouldn't be how Louis would rank it.

Come for the Scott. Stay for the Hayden.

His "precious bodily fluids" speech is my favorite monologue ever.

an example is like Clark Gable, Richard Burton and Marlon Brando, we don't really have anyone who has that sort of Beatles legend star power if you get me.

I agree =), I just saw Richard Burtons interview with Dick Cavett, and I thought he was just adorable and quite powerful, I think the most sad part was when he talked about alcohol and what it really does, I really understood him =)

I think the films of today can match up with the past but, maybe not the stars, because I think maybe its to do with Hollywood, lots of people in old days used to say that Hollywood was very cool and epic and glamorous, whereas now people think of Hollywood as sellout, drunk, horrible lol.

I would argue that the best films are just as good as films in the past, albeit in a different way. I'd agree with the statement about actors in general though. I don't know if the reasons are what RatedRStar says, though. I'd say its because, with the Internet and stuff, the personalities are no longer there. Also, the studio system isn't around to foster talent, so actors good enough to have become stars like Gable, etc. instead appear in more independent stuff because the studio system now seems to only make Michael Bay movies. As a result, the don't receive as much public exposure as they might have 60-70 years ago.

Out of the Nominees: