Alternate Best Actor 1955: Toshiro Mifune in I Live in Fear

Toshiro Mifune did not receive an Oscar nomination for portraying Kiichi Nakajima in I Live in Fear. 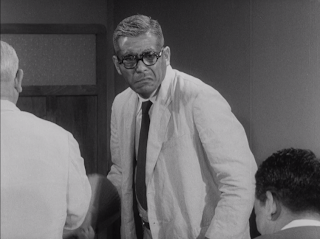 I Live in Fear tells the story of a man who attempts to spend his fortune to assuage his fears of nuclear war, but his family take him to court to prevent this. This is lesser Kurosawa, as it is not a masterpiece like Kurosawa's earlier film with somewhat similar subject matter Ikiru, but it is still a strong film on its own terms.

Toshiro Mifune plays the part of the seventy year old man Kiichi Nakajima when he was only thirty five himself. Mifune gave a performance as a character more expected of him in his solid reprise as Musashi Miyamoto in Samurai II in 1955, but this film without a doubt contains his riskiest performance. It is rather surprising that Kurosawa cast Mifune in the main role rather than Takashi Shimura who usually specialized in playing the old men in Kurosawa's films. Takashi Shimura even has the second largest part in the film as a domestic court counselor who becomes personally invested in the case of Nakajima. My only guess would be that Mifune was the star, or perhaps Kurosawa wanted to avoid the very obvious comparisons this film would have to Ikiru.

The youthful Mifune is tasked with playing a man double his age with only some fairly light makeup to aid him, the rest is up to him. Mifune actually does fairly well to overcome his miscasting being that he is always a very physical performer to begin with. In this case he heavily adjusts just about everything about himself to try to be convincing as Nakajima. He turns his mouth, almost to look like Shimura's honestly, he has an arched posture and slow deliberate movement to reflect Nakajima's age, and carries a generally haggard expression in his face. Mifune even cuts back on his growl, except when Nakajima's yells early on in the film, to a less robust voice. The makeup itself is never very convincing and a bit distracting at times, but Mifune made it so I did believe him in this role through his physical changes.

The story is essentially of two halves the first half being Nakajima and his children fighting over the use of his wealth. Kurosawa does not make this a black and white tale. Nakajima is not a saint having an overabundance of illegitimate children and his plan to run from the world is not a practical one. Nakajima also is technically very self absorbed in his problem not really seeing things clearly. His children though are not shown to be right though because rather than being concerned with their father's well being they tend to only care about the money. Kurosawa allows the story to play out and the viewer to take from it what they will. Mifune in turn does not play Nakajima as an especially sympathetic figure, but rather makes him into a case study of the fear of Nuclear war and paranoia.

The first half though is technically the more complex, although less powerful, part of Mifune's work. A great deal of the time is spent showing Nakajima frustrations at his family. Mifune does this well showing the disgust in his face, his voice, even right down to his bones as he constantly fans himself. Mifune portrays it as bothering Nakajima as an intolerable nuisance that he wants out of the way, as what Nakajima wants is to survive the nuclear holocaust he believes is inevitable. When he is not arguing with his family Nakajima is trying to find his relief by moving to Brazil. In one scene Nakajima sees his "refuge" and Mifune portrays Nakajima's reaction well as the man basically finding peace seeing a place he believes will protect him, and at this moment Nakajima seems truly without fear.

After the court case is closed and Nakajima loses his money Nakajima takes a turn for the worse. In a brief moment when planes are heard Mifune shows Nakajima's fear, but he carefully plays the part as a man who could set his mind on other things most of the time. After all he did believe he was doing something to save himself and his family. After he can no longer do something though Mifune shows the fear overcome Nakajima turning him into an emotional wreck, suggesting that his plans of before was the only thing that could allow him to function. Mifune is rather moving by losing the outward energy he had before into an internal intensity. There is nothing but fear that Mifune portrays in Nakajima's eyes. It is not a casual fear, but a crippling one that seems almost as if it is killing him.

Toshiro Mifune meets the challenge he is faced giving a compelling performance throughout the film particularly his final scene of the film that is quite startling. It begins with Mifune as a statue of a man who has lost his mind. Nakajima rather than dying from the fear has instead removed himself from reality to be able to allow himself to live. Mifune is amazing because he makes happiness something more disturbing than fear as he shows Nakajima as a man who has lost his mind. This is a terrific performance by Mifune even if he is helped back by the structure of the film. This film actually spends less time on the individual than is usually the case for a Kurosawa  film. Nakajima's personal struggle is often overshadowed by the broader portrait that Kurosawa paints, when Mifune has his chance to he shines, but not as often as with most of his other collaborations with Kurosawa.