Bob Hoskins did not receive an Oscar nomination, despite being nominated for a Bafta, for portraying Harold Shand in The Long Good Friday. 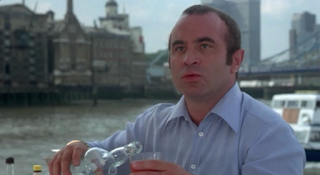 The Long Good Friday is a good film although I could not help but feel that if it just a little further with its concept it could have been a masterpiece.

The film starts with Bob Hoskins Harold Shand coming in from New York back to London rather excited for a big deal that will basically finalize his criminal empire in a legitimate fashion. Early on the criminal is not really all that suggested by Hoskins other than his less than refined manner, but for the most part he could easily be just a business man. Hoskins does this rather well as Harold Shand goes through trying to make the deal final with a big speech about bringing the greatness back to London. Hoskins is pretty good showing an earnest pride in the speech but at the same time playing up the fact that Harold is maybe forcing it a bit to really press the idea of the importance of the issue.

This all changes rather quickly though when bad things stop happening around him with several murders going on both successful and attempted involving both knives and bombs. Hoskins does something very important in his reactions from these early problems that befall Harold which is he shows that they deeply hurt Harold. One instance in particular as he grieves over the death of his friend is quite moving as Hoskins presents the connections all these violent acts had to Harold. This is not something that has just happened Hoskins shows that it does hurt Harold on a very personal level. It is not just the pain of grief he portrays but as well a great deal of confusion over the whole affair, which is something that will not going away for the rest of the film.

Harold does not stay nice for long as he quickly goes on a quest to find out who did these things and brutally return the favor. The early scenes of grief were essential though to make it so we can stick with Harold. He allows us to sympathize with him at first showing the human side to Harold nicely before we see the beast come out. The beast comes out though and Hoskins is incredible in the intensity that he brings to the part. He does not even need to say anything but just the way he stomps around suggests such violence in the man. Hoskins does not at all hold back in these scenes showing that even as Harold interrogates someone who may or may not be involved with murders he still issues their torture with a horrible sadism.

Hoskins realization of Harold as a character is something quite remarkable because as the monster of the man appears we see who this gangster clearly was. Importantly Hoskins does a certain type of sociopath here in Harold as he attempts his personal vengeance. The sociopathy aspect is controlled in a certain way not in a repressed way either. Hoskins makes it as something that goes right along with a great dominance as well. It is amazing to watch the way Hoskins dominates every scene he is in. Hoskins is excellent the way he seems ready to burst out any second yet still makes us believe that Harold is able to control and push around everyone around him in an attempt to damage control the situation at least early on.

One of the best aspects of this performance is the way he is able to maneuver through the constantly changing emotions in Harold as he goes throughout the series of events that only seem to get worst and worse for him. Hoskins is brilliant the way he will have the worst nature of the gangster slowly come out in one scene as he tries to get the bottom of it all in his feral anger that seems almost unending in the extremes he will get in his hatred that comes from his inability to understand why this is happening to him, but then in just a moments notice we seem like an understandable human being when someone snaps him out of it for at least a second. There is not a moment of disconnection Hoskins makes this all from the same man which is quite remarkable.

Something that is spectacular about this performance though is the way Hoskins seems like this man is as far as he can go in his grief, anger, and confusion near the beginning of the film, but some how Hoskins goes even further with all of these emotions even though he seems like he has already gone to the worst. As he seems to have no idea what to do he only becomes worse and Hoskins is at ten and somehow goes to eleven with his performance. The stress only make the hate in Harold to become worse, the confusion to overwhelm him all the greater, and even the scared little man inside of it all only becoming even more frightened by what this situation is doing to his life as well as what it is making him do.

When Harold finally learns what is behind it all he murders one of his closest men for merely telling him the facts of what going on. This one scene is almost the whole of his performance in a single scene as Hoskins shows a very honest fear in his confusion as he learns what is going on which soon becomes a harsh violence that is absolutely chilling because how sudden and almost how thoughtless Hoskins portrays the act. It is made only more striking though by the sorrow that Hoskins portrays as Harold comes to realize what he has done. We see him go from his least sympathetic to his most in just a few seconds and Hoskins absolutely achieves this almost impossible transition.

After thinking he finally can understand the situation in his terms Hoskins is great once again as Harold reverts back to the man in charge who quickly and efficiently goes about his plan to take down his enemies. Hoskins here perhaps suggests exactly how Harold got on top in the first place as he quickly and cunningly attacks the situation without hesitation. The results are not exactly as he wishes as he cannot save the deal from the beginning leaving one more speech from Harold to his would be investors. It is an interesting turn on his one from the start of the film now with a greater passion, but with far less hope and far more bitterness in the delivery showing how Harold's view has changed through his ordeal.

Of course the results are even worse then he thought as he has not won in any way as this enemy is different from those he has experienced from before. This leads to just a long take on Hoskins's face which is a terrific piece of silent acting as we see him start with only genuine surprise at what has happened, to anger filled with disbelief to finally settling at an acceptance that is just perfect because Hoskins finally shows us Harold without a single move to make. Hoskins performance all around a fascinating depiction of this rather peculiar English gangster. Like Edward Woodward in Breaker Morant Hoskins gives a very humane and memorable portrait of a man capable of terrible acts.

im surprised but pleased that you chose to review him, he was a very underrated actor, shame he has retired he was quite likable and charming despite being cast Cagney style in many of the same roles although he was great in them.

That final shot really is masterful. Seeing this film after having grown up with Roger Rabbit, I was really amazed to see Hoskins' range.

I think this was a 81 release in the usa.

I looked on imdb and it says 1982 usa release date.

Interesting mrripley! I've always considered this a 1980 film, as does everyone else I know, but I also never looked up the release date. I would almost prefer to move this film to 1982, since that means that Hoskins can win AND John Hurt can as well.

It would count as 1981 as that's when it received its first theatrical release, which was in Norway in March, 1981. The 1980 release was at the London Film Festival, which Louis has said he doesn't count.

No he hasn't, but looking on the bright side, he didn't age a day between 38 and 46. He looks exactly the same here as he did in Roger Rabbit.

Breaker Morant was relased in usa in 81,i think this year needs a rethink cos it messes up every other year,why don't you 81 instead.

I did hesitate to put him here do to the release date, but it has the listed UK date of 1980. Yes on imdb it says the London Film Festival but imdb does not state any other release for it until a re-release. I have to assume it must have also gotten a UK release soon after since it is a UK film and it would be strange if it did not. I wish there was an easier way with this one, but right now I'll keep with my assumption.

As for Breaker Morant that got an Australian release in 1980 and I do go by its first non festival.

Honestly I hesitated to review him simply because of the release date issue.

Had a quick look at the online archive of the British Guardian newspaper and it looks like the film was made in 1979, shown at the London film festival in 1980, and put on general release in 1981. Kind of indicative of the British film industry at the time that such a good movie took so long to make it to cinemas.

Is there an exact date for the UK release? If there is I will send Hoskins on his way to 81.

I'm going to try to look around to see for sure as well. On a different note, how was Mirren?

Fairly limited role but she was good.

Good. I've been skimming the articles that came up when I searched the movie and UK release date on Google, and I've found reference to a 1980 release date (that seems to not be the London Film Festival since he mentions British theaters) here (http://www.criminalelement.com/blogs/2013/05/gangster-cinema-british-style-the-long-good-friday-scott-adlerberg-bob-hoskins-helen-mirren-film-london-docklands) and to a 1981 theatrical release here (http://film.thedigitalfix.com/content/id/62297/the-long-good-friday-anniversary-edition-in-september.html)

Now I'm thinking 1981 because of the second sentence in the review almost 1/4 of the way down the page here:
http://www.amazon.co.uk/Long-Good-Friday-Special-Edition/dp/B000067NQM

There's a Guardian article from January 1981 which says 'The Long Good Friday, which critics praised to the skies when it was shown at the Edinburgh and London Film Festivals, is to get a cinema release after all.' So definitely a 1981 general release in the UK I think. A subsequent review from 21 February mentions the film opening 'on Thursday at the Ritz and elsewhere'.

Yeah I think I'm going to have to put him in 1981 as the UK 25th anniversary DVD puts it in at that year.

Do you have that online? If so, copy the link because that's a better source than any of the one's I've found.

Also thanks very much to both Michael and hountang for the information.

Very well. Glad to be of assistance. I assume you'll just replace him with Woodward instead of adding another nominee?

no worries. I don't think I can post that link Michael as it is behind a paywall. The site is proquest (an archive of newspapers etc) and I get access to it via my university website.

Glad i could point this out,it is 81 my dad says he watched it in 81 whilst on a london trip.

Wat about day Lewis in my left foot

I knew I forgot someone he's should have been number 7.

Wat wud ur next 20 be just curious