Brian Cox did not receive an Oscar nomination, despite being nominated for and winning awards from several critics groups, for portraying John "Big John" Harrigan in L.I.E. 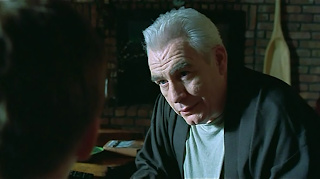 L.I.E is a film about a teenager Howie (Paul Dano) who slowly becomes involved in a relationship with a pedophile. This is one of those very edgy films, but honestly I found it mostly dull that seemed to rely too often on its edginess rather than making a truly compelling film.

Brian Cox plays Big John which is likely the aspect of the film that caused it to be rated NC-17, as Big John is the pedophile who slowly becomes interested in Howie after Howie and his friends stole from him. Cox initially is full on creep, the very definition of it. Unlike say Stanley Tucci in The Lovely Bones, Cox plays the part very realistically and is very unnerving because of that. He does strive away from this man's method instead being quite blunt about it as he portraying Big John as the man who seems so nice as he approaches the boy with his big smile, and gentle charm yet with those very unpleasant thoughts clearly going around in his mind as well.

Cox doesn't hold back in his portrayal of Big John the pedophile. He does not to try to make him extra colorful, or even say a villain making actually far more disturbing in a way in that he is the day to day pedophile. Cox is so unbearably natural as he both threatens as well as comes onto to Howie at the same time. Cox is all too effective really because he doesn't hesitate, and there is just a great deal of casualness in his performance. This seems all standard for Big John, its what he does and Cox doesn't show him to have second thoughts when he is doing his come on. He makes it clear that this is not something new for Big John rather something he does all the time.

Big John is not a man like Stuart Whitman in The Mark who knows he has some serious problems and can barely live with it. Cox portrays Big John as a guy who lives his actions just fine, there is some regret that Cox brings to Big John to show him as a human being, but Cox makes it abundantly clear that his shame never is enough to rid him of his sunny demeanor. Cox never takes an easy route with his performance making a very strange yet always believable portrait of Big John who most definitely is a creep, but at the same time not as some sort of pure evil psychopath either. He never cops out in terms of the filth of the man's mind yet still seems natural whenever Big John is charming or seems to honestly care about Howie and not in a sexual fashion.

Brian Cox gives a compelling turn here that is easily the highlight of the film. He mixes different elements of what could be entirely separate characters, but he is able to meld them into one single man. Cox is able to fully be the creepy pedophile never shying away by how intense he will be at times or just how unabashed he will be about the whole matter. In the same man Cox does show a man though and he is honestly does bring charm into his performance, and even seems natural in the moments where Big John acts as much more of a mentor. Cox manages to make it so neither part of his portrayal compromises the other succeeding in realizing Big John as a complex character who easily is the most intriguing as well as sickening aspect of the film.

Sounds like Mysterious Skin. I swear, I couldn't sleep for a week after that one. You can throw Snowtown Murders in there as well for "creepy pedo" movies, though that focused more on a serial killer.

I really just cant watch these movies, I really cant they are just too much, also I really dont like Paul Dano as an actor (does he have a personality??)

Also on a separate note I managed to watch Persona 4 the anime lol, and I thought it was great (ive ordered the game too), only thing I didnt like about it was the homophobic jokes that Yosuke uses against Kanji which are surprisingly tasteless.

@RatedRStar: I can live with Yosuke's homophobia because he's meant to be a prick at times. It's the ugly side of him to the flipside of his "Brosuke" moments. Plus both the game and the show rightfully punish him with a big slap of karma every time. That being said, the jokes were less tasteless in the game. Plus you can reprimand him in the game every now and again. If you have a Vita, you have no excuse not to but Persona 4 Golden. If not... get one.

Y'know what, here's my facebook profile, RatedRStar. Now we can stop spamming Louis with gamer talk:

Feel free to friend me. Same goes for all of you who comment and debate me here.

Try again, should be fixed.

Brian Cox is such a great actor. I haven't seen this, and despite what I just said about Cox, I have no real desire to.