Alternate Best Actor 2001: Billy Bob Thornton in The Man Who Wasn't There

Billy Bob Thornton did not receive an Oscar nomination, despite being nominated for a Golden Globe and winning several critical awards, for portraying Ed Crane in The Man Who Wasn't There. 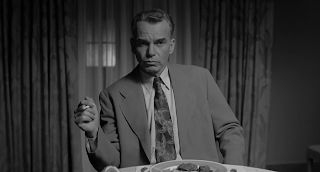 The Man Who Wasn't There is an effective though certainly very dry film noir about a barber who sees his life go to pieces with just one case of blackmail.

It seems rather strange that Thornton was unable to receive a nomination for his performance here considering he had a banner year. The problem very well might have been that he had both this and Monster's Ball as viable options. Although on a whole Thornton did receive the most individual attention for this film, it just probably was not enough for this to be taken as the obvious choice. In fact since he received a little more attention for this might have confused the academy even more as his Monster's Ball character is a bit friendlier one in terms of the type of character's they usually go for.

One of the most unique aspects to the Man Who Wasn't There as a film noir is its protagonist. Usually in film noir what gets the character in some sort of trouble is the fact that he gets passionate about something too passionate for his own good. Well the last word that would come to one's mind when describing Ed Crane is the word passionate. Thornton has quite the challenge as Ed Crane in that he needs to play him as the The Man who Wasn't There, yet he also needs to avoid seeming like he is just phoning it in. He has to make us interested in Ed Crane own personal little story even though Ed Crane does not seem exactly all that interested in it himself.

What Thornton does in the role works as he creates a unique characterization for that of Ed Crane. It is not that there are any tics or mannerisms one would usually associate with a distinct character, but nevertheless Thornton makes Ed Crane just a certain sort of man. One could actually say there is a manner there but it is of the unassuming retiring man who prefers to sit and stand quietly much more than talk. Thornton finds just the perfect tone for Ed. He isn't shy, he does not really dislike people, Thornton is able to find that type of man who just would rather be left to his own devices, for better or worse.

Thornton takes a dead pan approach which is interesting since this is not a comedic performance for the most part, although there are certainly a few darkly funny moments in his portrayal. He is much like a dead pan comedian though in that he successfully brings us into the story even though he keeps that same style pretty much throughout the film. He is able to be fascinating to watch just through his dead pan fashion of the part, and there is something just easy to watch this peculiar type of man fall into the film noir plot that is usually left to more pronounced individuals. Thornton is able to make us care even when it may seem like Ed barely does.

One thing that is particularly compelling in Thornton's work here is his narration. It further punctuates every scene with the style he creates so well with Ed Crane, and works along beautifully with his performance on screen. The two blend together seamlessly to make Ed the interesting unique protagonist for this noir. Thornton is terrific in bringing his character's style to the forefront in every scene, and never wavering from it. There are two quick moments where he gets a little more emotional, but only in a completely understandable context that makes sense for Ed. Those to brief moments aside Thornton is able to bring something out of every scene within his purposeful style.

It is a shame that Thornton was not recognized for this performance or his also strong more emotional performance in Monster's Ball. He is very good in both performances of character's with rather differing styles as Hank Grotowski his character in Monster's Ball who most certainly is a man who is there. I like both performances a great deal though I do prefer this performance a little more. I just love what Thornton is able to bring out of his character, and does so much with what seems so little in terms of the character's less traditional emotional arc. It is a great piece of acting by Thornton that does so well in the creation of his character, and shows that it is possible to make even a man who is suppose to be boring can be compelling.

What did you think of Ledger in Monster's Ball?

He was good, although I thought his impact was limited due to his screen time.

Honestly, Ledger was the only thing I liked about that movie.

is Monsters Ball any good?, I only saw bits of it. I really liked The Man Who Wasnt There though, quite well acted and interesting.

I did not care all that much for Monster's Ball, I did like Thornton's and Ledger's performances though.

I've only seen stills from this but it LOOKS GORGEOUS. Gotta love Roger Deakins.
Louis, from your above comment I take it you didn't like Halle Berry all that much?

No not that much.

I've been following your blog for some time, and really enjoying reading your thoughts on various Oscar-nominated (and now non-nominated) performances. I'd like to suggest some names for 2002 Supporting Actor, should you get around to it:

Hey Psifonian!
Didn't you make some Oscar mashup videos on YouTube, with Psifonianawards account? I love those :P

@Psifonian: Hey man, I comment on your videos all the time. Some good suggestions for 2002, particularly Gleeson in GoNY and Craig in Road to Perdition (and my friend swears by Liotta in Narc). If I may throw my hat in the ring as well with some suggestions for that year:

Robin Williams in Insomnia (Louis, you actually have to review this one because it was an official request from me)
Andy Serkis in The Two Tower (Obvious choice is obvious)
John C. Reilly in The Good Girl
Jake Gyllenhaal in The Good Girl
Dennis Quaid in Far From Heaven
Dennis Haysbert in Far from Heaven

Psifonian, Koook: Thanks for the suggestions. I probably will do 2002 when I come back to the 00's again since there are official requests for both lead and supporting.

Do you consider Gere lead or supporting in Chicago? Just curious.

I think I would put him in lead, but I would say you could make valid arguments for him to be placed in either category.

I consider him supporting because I find it amusing to think of Billy Flynn as a guy who thinks he's the leading man, but totally isn't.

Like I said, if you place him in either category I'm not going to argue.

Yes, I do those videos. The account is under "Stephen Davis" now.

Jettison Kretschmann (I had him as filler, frankly).