Raul Julia did not receive an Oscar nomination for portraying Gomez Addams in The Addams Family. 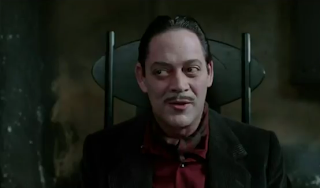 The Addams Family certainly is a film that takes me back and has a considerable nostalgic factor for me. Discounting that, it is a visually memorable and enjoyable film version of the strange family fascinated with macabre.

The last time I looked at a Raul Julia performance it was for his powerful turn in the very dramatic Kiss of the Spider Woman. This is a very different film for Julia but shows his great range as a performer as now he takes on a comedic turn as the patriarch of the Addams Family. Julia takes the approach that Gomez is pretty much certifiably insane although he does this quite uniquely in both downplaying the part and overplaying it at the same time for the best effect for the film. This sort of technique to go about a role certainly would be troublesome, but Julia knows how to handle such a role with the proper conviction.

In his scenes of downplaying Julia is great in being the overload of his manner in his quiet dignified manner, but always with a sly sense of humor at the same time. That is really what Julia does in every aspect of playing Gomez which is easily fulfill the dramatic requirements of the role when they are required but more importantly always stays quite humorous in the role. What works so well about this approach is how much conviction Julia has in a role like this, just because he is a comedy that is of the Addams Family never gives him a reason to give a halfhearted performance no matter what he is quite passionate and throws himself completely in the role.

Julia is enjoyable in playing morose quality of Gomez but for my money he is even better when he goes wild which Julia has a tremendous amount of fun with. His expressions are always have the utmost glee in them and he makes watching his behavior quite enjoyable. Although he could not be more different than when he is downplaying somehow Julia manages to make it all part of the Gomez. Hard to explain how other than we see him go from quiet to loud in the same scene and Julia does it so naturally even if it seems completely insane. Julia is always entertaining although he goes overboard technically speaking it always fits the character even when he goes all the way mamushka which is very enjoyable thanks to Julia.

Gomez obviously is not the most complex performance that Raul Julia ever gave but it does show his considerable talent as an actor. Julia shows his great ability as a comedic actor, although part of the reason his performance works as well as it does is in a certain way he portrays the role just like he would a serious role. He has great moments throughout the film, and my personal favorite would have to be when Gomez goes into a depression and forgets his duties as a father stating that he could not go on a drive with his family because it would cause him to miss Gilligan's Island. This might not be Julia's greatest role or his greatest performance but it is a fun one just to watch.

I love this performance. The film was one of my childhood favorites.

Im really looking forward to seeing your Street Fighter review on him, I thought he was great in that as well.

THE DAY THE GREAT BISON GRACED YOUR VILLAGE WITH HIS PRESSENCE WAS THE MOST IMPORTANT DAY OF YOUR LIFE, BUT FOR ME... IT WAS TUESDAY!

(I know he didn't shout in that scene, but I think it's funnier in all caps.)

v v underated actor,he would have 2 oscar noms from me before he died,kiss of the spider woman in 85 best actor nomination and 1988 best supporting actor nomination for moon over parador,the globes loved him 4 noms in 9 years,.