James Cagney did not receive an Oscar nomination for portraying Arthur "Cody" Jarrett in White Heat. 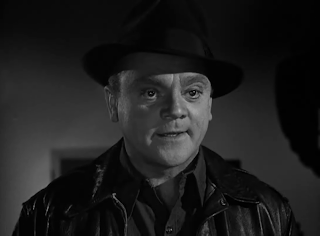 White Heat is a pretty effective crime thriller about an undercover cop (Edmond O'Brien) who attempts to bring down a psychotic criminal and his gang.

James Cagney is obviously no stranger to the gangster genre. He played a whole slew of criminals throughout his career. There is a difference here than compared to many other of his criminals and that is with the nature of Jarrett. Where in Angles With Dirty Faces he played a bad guy who had a soft spot somewhere down there. In White Heat Jarrett is someone rotten down to the core. Even something that could seem like a soft spot such as the closeness to his mother seems more disturbing that anything else. This is probably the evilest character Cagney ever played despite having played so many violent characters in his career.

In Angles With Dirty Faces Cagney would go from a somewhat charming fellow but fall into the role of the menacing criminal when necessary. Cagney as Jarrett though never has the vicious criminal go away. He makes Cody as a constantly violent man, and his variation is that of becoming worse. He is on the edge to begin with, and Cagney plays it that the only place Cody can go is off the edge. Cagney takes this specific way of portraying of Cody and goes all the way with it. He never lets up on the menace with Cody here and that works. In the scenes where Cody is with his wife Cagney stays true to the character never letting up on the idea that Cody could just snap from the slightest thing.

This was that Cagney takes with Cody absolutely works in making him an effective, and importantly unpredictable villain. It is quite interesting to see Cagney to play a character of this all the way, and not hold back at all. Cagney is always good at being the villain because he always manages to be quite energetic in his evil, and here he has the same sort of appropriate fun in his portrayal. He puts a great deal of glee in his evil as Cody. He makes this portrayal memorable and it stands aside from his other performances of his somewhat similar characters by just how far he goes with his intensity and insanity here that really works in making Cody a memorable villain.

The highlights of Cagney's performance comes in the moments where the already psychotic Cody snaps. The first time it occurs when he is told that his mother is dead. Cagney is great in the scene as he shows Cody break down mentally, and physically in a fit of anger and heartbreak. It is a very powerful moment, and Cagney successfully shows the only place Cody really has left to go. The other time this occurs is at the very end of the film and this almost animal side of Cody comes out again when he is backed into a corner. Again Cagney is excellent showing the insanity of Cody fully that leaves without any sort restrains left leaving him truly deranged. It is incredible end to his performance that expresses his character's lunacy in one final extreme burst.

This is a very strong performance by Cagney particularly because the most expressive moments are actually his best. The reason these scenes work so well, besides the fact that Cagney just is fascinating to watch in them, is that he builds to them properly through his tense performance as Cody the rest of the film. Cagney really succeeds well with his performance here as Cody Jarrett. It is particularly remarkable the way Cagney makes Cody such a unique memorable character all in his own right despite playing so many similar characters. Cagney manages to do this so well by finding what makes Cody different from those other characters, and expressing theses differences brilliantly. Cagney honestly makes this film with his terrific villainous turn.

I think my predictions, and most of the other bloggists have failed since most of us predicted Cagney as 1st lol I reckon Mifune especially will get 5 stars.

On a side note, has anybody here seen the musical called cats, or the film version =D and if so what ya reckon to it.

also Louis did you enjoy Jesus Christ Superstar cause, well I dont no Im in a musical mood lol.

Surprised he didn't get a 5.

As for Cats, I've never seen it, but I've heard most of the music. The songs are decent, though I frankly don't know what everyone says is so special about the show. Andrew Lloyd Webber's written significantly better stuff during his career. As for the film, I didn't even know they had one, and looking it up, my guess is that I wouldn't like it, especially given that it was direct-to-video.

Yes I really like Jesus Christ Superstar, Carl Anderson is great as Judas in the film version.

As for Cats some of the songs are fine, but the story itself is quite bland.

its cause I see cats the musical as being kind of a, lovely guilty pleasure kind of thing, since I dont no most of the characters are kinda friendly and really likable,

As for Jesus Christ Superstar well it looks like ill watch it, certainly looks entertaining.

is ther any other musicals that are really great (sorry I ask too many questions) , ive seen Cabaret, the recent Les Miserables, Velvet Goldmine (which I hated lol), Star! (which was pure torture) and Victor/Victoria (which I didnt think much of)

It's probably best not to ask me as I really am not that big a fan of musicals. I just happen to really like the few I like.

Imo one of his best. I have my reviews up.

Amazing performance, an easy 5 for me, he's my choice for Best Actor that year!

A brilliant performance, I have high hopes for Price now!

I cannot honestly think of a musical that I would consider a quality movie.

Well, maybe I'm Not There, if you consider it a musical (or any genre for that matter).

=( Cats =( =( lol the only musical wher every character is huggable lol.

The question here becomes whether we're talking about movies of originally stage musicals or movie musicals with original songs. I really like movie musicals, though I don't know of very many that I would consider brilliant.

In terms of movie musicals taken from Broadway, it's hard to find one that's really perfect that everyone will like. I know I loved Les Misérables, but as discussion here has shown, that opinion is not shared by nearly everyone. There are some terrible adaptations of musicals to film, but there are a good number I would consider to be quality films. I think West Side Story is, for the most part, a masterpiece, even if there are . I also really like Fiddler on the Roof, Cabaret, Rocky Horror Picture Show, and Grease. I grant that a number of these types of movie musicals are too long, Fiddler included. Another that I enjoy, but that goes on too long is Funny Girl.

In terms of original movie musicals, I thoroughly enjoy pretty much every Astaire-Rogers movies. 42nd Street also immediately springs to mind. I'm also a fan of many of Gene Kelly's movie musicals. I find them quite entertaining, even if he's never anything special and the movies themselves are never more than just entertainment. I'm pretty sure many don't share this opinion, but I love Singin' in the Rain. There are also, of course, all of the Disney animated musicals, which range from fantastic to quite bad. The original Willy Wonka movie is also a joy.

I like 42nd street a lot, um I only have a little grudge against West Side Story cause Chakiris stole Montgomery Clifts oscar, um have I mentioned to anyone I like cats =D, love Rocky Horror Show in a cheesy kind of way (Tim Curry is um, kinda nice in that film) =D.