Robert De Niro did not receive an Oscar nomination, despite winning NSFC, for portraying Johnny Boy in Mean Streets. 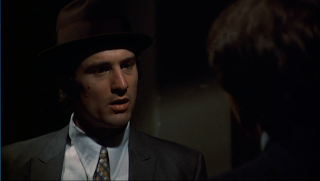 Mean Streets is an effective film about a low level criminal Charlie (Harvey Keitel) who has trouble succeeding particular due to his impulsive friend.

Robert De Niro portrays Johnny Boy, Charlie's impulsive friend who is more than a little bit of trouble for Charlie's reputation as a respectable sort of mafia man. Johnny Boy is a character in the film who comes in and out and is almost like weight on Charlie's attempt to do anything else. De Niro here plays Johnny Boy as a bit of an idiot who doesn't have any self control. Early in the film when Charlie first confronts him over his debts, De Niro is great in showing that the name Johnny Boy is quite apt in that he is basically is just a boy in a man's body. This particularly effective when he tries to side step the debts by saying, just like a kid would, that it is just not a big deal.

Something that De Niro does importantly here as Johnny Boy is that he does not really portray him as thuggish as many actors might have done. Johnny Boy does some criminal acts as well as gets involves with some of the activities run by Charlie, but he is not really a career criminal by any means. De Niro importantly gets down the characterization of Johnny Boy perfectly. He is capable of violence like getting into fights, he will even blow up things, but I think De Niro expression after blowing up the mail box shows the most important thing about Johnny Boy. His expression is not of cunning, or of an enjoyment of violence. It instead is the face of a not particularly smart man having some fun, nothing more than that.

De Niro finds just this right tone for the troublesome Johnny Boy who consistently gets into trouble through his manic behavior, which De Niro portrays really well with a great deal of manic energy. Whenever he gets into a fight or is partying around in some what De Niro has an effective youthful enthusiasm into the role that is fitting of Johnny Boy as a man who never grew up. I mention his child like behavior again because it is really important to him being at least somewhat likable, and the fact that he does not portray Johnny Boy's antics as that of a truly lowly criminal, makes it far easier to like him at least to some degree.

The likability of Johnny Boy is essential because it has to be believable that Charlie would bother to stand by him despite all the trouble he causes for him. De Niro makes it acceptable that Charlie would keep making excuses for him, despite being such a problem. He and Harvey Keitel have a certain chemistry that really works together. Although they never state their friendship out loud the two manage a nice camaraderie in their scenes together to properly suggest that they go way back. This camaraderie between the two reinforces this idea that Charlie would keep getting himself into bad situations simply because Johnny Boy gets in these situations.

Robert De Niro gives a strong performance here as Johnny Boy that offers just the right type of dynamic with Keitel's more controlled performance as Charlie. He adds nicely to the film throughout making Johnny Boy the crazy variable he should be, that builds nicely to the moment near the end when he really breaks down even more. De Niro handles these final scenes well because he built to them with Johnny Boy's increasing frantic behavior throughout the film. De Niro gives a realistic portrayal of Johnny Boy, who could easily have been played far too flamboyantly. He leaves a remarkable impact on the film, and makes Johnny Boy one of the most memorable aspects of the film.

Whoa! Was expecting 5 for this lol

It's such a shame he's taken to acting in such terrible movies nowadays. Even after the great SLP he still is slated to appear in terrible stuff in the future

De Niro's streak in the 70's was uncanny, this performance included. He may even be my winner this year.

There, five years of holding this terrible secret and now it's out. I'm going to be burned at the stake.

Your obviously not going to have anybody who agrees with you

its like coming out of the closet lol =D I bet Koook160 feels much better now =).

my personal favorite in my opinion for 1980 was actually John Hurt for The Elephant Man, but I still liked Raging Bull and De Niro in it, im not a huge De Niro fan if im honest though.

The thing with De niro is he needs great material to shine with. Thats why I rate someone like Gene Hackman much higher, hes more versatile and can elevate weak material in a way that De niro cant. Hackman will never get the credit someone like De niro will because people are so in love with the films he did with Scorsese that he will always be rated as a better actor.

Yes. That is why he is not in my top ten actors. I think in a way as its important to look at how actors are in bad films, as they are good films to really determine the best of the best. As some actors elevate lesser material and some just basically give up.

My personal favorite lead from 1980 was Timothy Hutton in Ordinary People.