Boris Karloff did not receive an Oscar nomination for portraying Byron Orlok in Targets. 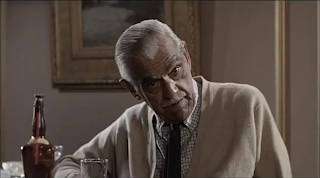 Targets tells the coinciding stories about an aging Horror film icon who sees himself as a relic, and that of a normal looking man who goes on a killing spree. It's an intriguing and effective film, although it ironically is rather dated, and I would say a better film definitely could be made based on the same idea.

This is what most would consider Boris Karloff's swan song performance. He actually was in a handful more film after this one, but this was definitely a significant one as it really allowed him to reflect on his whole career. Where Bela Lugosi ended his career with Plan 9 from Outer Space as a has been who had faded in obscurity leaving Martin Landau to give the performance of self reflection in Ed Wood. The interesting thing is Karloff got to do it himself as he never became a has been having a career very much to the end of his life. He might not have held the same popularity like the start of his career but he never went the way of Lugosi.

Karloff as Byron Orlok, who is Karloff in every way except for the fact that Karloff was never fed up with the film industry the way Orlok is, of course has a credibility and weight no other actor could have held at the time. Karloff as the film star, who still is playing the heavies of old, is quite an interesting performance that utilizes the whole idea of Karloff as a monster well. One of the interesting parts of Karloff is that despite playing monsters throughout his career he had such a nice and tender voice. Karloff shows very much the man who created the monsters a man, who does not have a monster in him at all.

This film creates the dynamic of going back and forth between the very brutal scenes of the psychotic killer than showing the fairly lighthearted scenes of Orlok. Karloff plays these very well because he really doesn't stress the whole negativity to the film industry too much, and he doesn't show it as something Orlok is in despair about either. Karloff stays fairly light, and very likable as Orlok. In regards to his retirement Karloff portrays it more of Orlok as just not seeing the point of making his types of films. He is very gentle in reflecting this discontent, as it is not something that is constantly troubling him, but he is very firm about this sentiment.

Karloff instead of focusing on just the depressing qualities of the character, actually is pretty good at showing a fonder memories of film career in key moments that show he most certainly does have a love his work, its just the general change in the world that has left him with his feelings of pointlessness. There is a nice comedic touch to his performance as well that lightens up the film a bit from the humorless murder scenes. He has a nice bit of fun in his scenes with Peter Bogdanovich as a young writer whose film Orlok has decided not to do. In their scenes together Karloff has a some good moments just poking at his persona without ever going too far with it either keeping the right tone for his part of the film.

Karloff mostly does this likable work as the slightly tired, but still charming Orlok for most of the film, but there are two scenes where we see him perform. One is in an interview where to make things interesting he tells a scary story, it is a lot of fun to see Karloff in a seconds notice on the scary voice and we see him perform. The other time he does this is when the two stories meet and Orlok directly confronts the sniper. It is a bit of an absurd scene, but Karloff sells it through his portrayal of Orlok once again by bringing out the performance as the monster of old. This really is not an especially complex performance by Karloff but it is a very nicely handled enjoyable performance that acts as interesting reflection on his career.

nice to see Karloff being recognised =D ohh I have a nice question for everyone, who was your favorite universal monster.

Frankenstein pretty easily especially since his films are the best too.

ill not mention mine its way too obvious lol.

I've heard Bogdanovich is pretty bad in this. What'd you think of him?

He was pretty dull, but I did not think he was anything that bad as his role is quite bland.

I reckon we ll be seeing Karloff reviewed a few more times on this blog.

Oh and it was Claude Rains in The Invisible Man if anyone hadnt guessed lol.