Cary Grant did not receive an Oscar nomination for portraying Jerry Warriner in The Awful Truth. 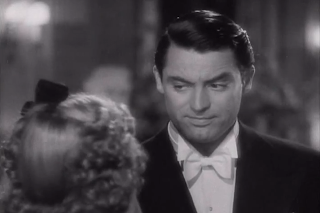 Cary Grant never received an Oscar nomination for a comedy role not even for this role in this film which won Best Director, and both his leading lady Irene Dunne, and his supporting foil Ralph Bellamy were nominated, but he was not. Interestingly enough when they teamed up again for the weepie Penny Serenade Cary Grant was nominated and Irene Dunne was not. For whatever reason even when the film was as popular with the academy as this one, they never cared for Grant in a comedic role. They only could accept him as a nominee when he was being serious which certainly is too bad.

Cary Grant here is in prime form as the husband of a soon to be divorced couple. It is not that Jerry and Lucy (Irene Dunne) hate each other that brings them to this point but rather odd behavior from both of them leads both to believe there is infidelity going on. They get the divorce that will take place after a grace period during in such the two seek other romantic interests, and the film is pretty much set up as first Jerry sabotaging Lucy's attempt with the simple southerner Dan (Bellamy), than afterwards Lucy sabotages Jerry's attempt with an heiress.

Grant has quite a bit of fun with his role in his half of the sabotage, as he purposefully moves against her rather simple beau. He does this with simple jabs at him, and rather small gestures that always seem to say that Dan simply is not in the same league as Jerry. Grant is extremely good in just being the being the most cunning one in the room as he constantly does his best to humiliate Lucy, and ruin her chances away from him. His timing is always terrific, and his energetic never falls short of bringing to life the humor of any scene.

Grant though is equally good though in the scenes where he forced to be the one who gets the shorter end of the stick, when Lucy gives him an ample taste of his own medicine. His reaction to her behavior that is quite a bit similar to his earlier behavior to her is excellent as the two of them switch places. His reaction of a sort of bemusement as well as sometimes complete surprise at the extent she goes to prevent him. Grant's reactions are always quite amusing as Jerry is taken aback by Lucy's behavior which is only mirroring his own.

I would say though most important aspect of his performance as well as Dunne is of course there chemistry. In that they both bring to life their relationship in just the right fashion. Firstly their divorce, and their game of ruining each other's romantic affairs are always kept lightly comedic by both actors, never in any way making it seem unpleasant. Equally to their credit though they always manage to put just the right degree of weight in their performance.

This is not that either actor makes the situation at all serious but the two bring about the idea that the two are a married couple that do actually love each other. Both show their reactions to properly betrayal and neither make it as so they are completely heartbroken, but the two do stress the idea that they do care even behind all the humor. It is rather subtly portrayed by both behind their more comedic reactions, the two have just the right emphasis in the scenes together that the two still have a connection with one another.

This connection is the reason why both of their best moments really come in their silent looks they give to one another. They are both terrific in conveying that the two absolutely do know each other far too well, and when one or the other are pulling a trick the two actually are quite genuine in their response, even though they can be quite funny as well. Grant and Dunne simply make the most about the relationship between the two, and really they are able to make the ending properly a forgone conclusion.

I should say Cary Grant's performance on its own is a charming performance that is very enjoyable to watch, but what does make it special is his chemistry with Irene Dunne's terrific performance. The two together make this film the delight that it is because of how well the play off each other in every one of their scenes. Alone though this is not Cary Grant's very best performance in this genre but it is still an entertaining one that shows his great abilities as a romantic comedy leading man.

Great! He's at least in the top 3!! I think his best comedic performance was in Bringing Up Baby so I can't wait for 1938!!1

I though he was incredibly funny and great here.

Also, what'd you think of the film?

The film is very enjoyable.