Best Supporting Actor 1956: Robert Stack in Written on the Wind

Robert Stack received his only Oscar nomination for portraying Kyle Hadley in Written on the Wind. 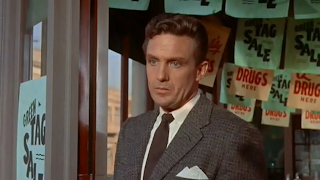 Written on the Wind is a melodrama that tells about the son of an Oil tycoon who marries a woman Lucy (Lauren Bacall) loved by his best friend Mitch (Rock Hudson) who in turn is lusted after the son's nymphomaniac of a sister Marylee (Dorothy Malone).

In the case of melodramas from the fifties acting usually is divided in the dull and the over the top. In this case there is the dull of Hudson and Bacall, and the over the top of Malone with Stack in the middle. I find with melodramas of this sort it is best to overact to not fade in with the dullness of the surrounding performances. Stack interestingly enough actually tries not to be dull or overact early on as Kyle the oil tycoon's son attempts to woo Lucy to be his wife while admitting his flaws to her at the same time.

I feel Stack does actually try to convey the feelings of his character by trying to be realistic. It does not really help that his character is written in as shallow of a manner as he is, yes I know that is all the point of Douglas Sirk's irony that modern critic love so much, but nevertheless it does not allow for a particularly interesting performance. I will give Stack credit in that he does try to play the part straight, and realistically but it never amounts to anything particularly moving. I would say his attempts put his performance above the level of Bacall and Hudson but still he does not create a compelling character.

Stack consistently tries as his character slowly feels anguish over his empty life and his fears over his marriage. Stack stays in a similar tone with his character which makes sense actually since he tries to take his troubles in stride at first. In the second half of the film though Stack moves more to the over the top type of performance as Kyle's troubles become worse as he finds out that he might be impudent and with coaxing by his sister that his wife might be having an affair with his best friend. Stack, as I am sure Sirk wanted, gives up his attempts to stay grounded as Kyle.

Stack as Kyle becomes alcoholic and maddened with jealousy and Kyle becomes more and more like his sister with his over the top behavior. Stack I feel never becomes bad actually and is effective enough actually in the role still. He never goes so far that it seems like acting just for acting sake. He still manages to be his character within his film which is purposefully overblown. Also I must say in his over the top moments Stack does have a few more emotionally piercing moments, in an over dramatic way sure, but they are moving nonetheless. This is not a deeply felt portrait of an alcoholic, but the portrait of an alcoholic in a Douglas Sirk film.

I can't say this a performance that ever amazed me in anyway his character early on is very dull and although Stack did his best not to fall into the dullness he could not exactly completely avoid it either. In his more of the over the top sequences he does become a little interesting but even with such big over the top emotions on display the performance still did not make a great impact. I will say this is not bad work from Stack by any means actually he does his absolute best at first to try to find something with just about nothing, and than later on he does do his best to be over the top while still being a character. It is never great work but it is far better than it could have been.