Randy Quaid received his only Oscar nomination so far for portraying Larry Meadows in The Last Detail. 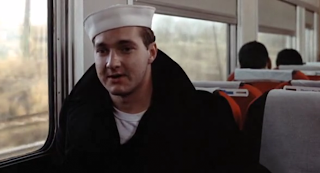 Randy Quaid plays the arrested Seaman who "Bad Ass" Buddusky (Jack Nicholson) and "Mule" Mulhall (Otis Young) have to bring to the brig. Larry Meadows is a young wet behind the ears kleptomaniac. Quaid is absolutely quiet for a good amount of time during the film. Quaid just shows Larry to be a very sad, very modest fellow, who just steals things basically just to steal them there is barely a purposeful criminal intent, he just does not know any better.

With this Quaid creates an appropriate sympathy for Larry because Larry is such a pathetic guy. He never makes Larry's problems seem at all malicious nor does he make his inexperience seem unrealistic or annoying. There is a genuine naivety to Quaid's performance that works well for the film, and makes the sympathy Badass and Mule gain for him properly believable. I particularly liked when he goes to his home where no one is that just shows the sad state of Larry that Quaid has shown it to be something he has pretty much accepted.

After setting up this characterization though Quaid really has very little to do. Most of the time he just reacts with a very modest and sad response to the behavior of Badass. He has a few moments where he freaks out an makes some impulsive escape attempt, which Quaid shows exactly what it is, but other than that there really is not anything that special about his reactions. Quaid is as he is, he really does not show change or growth nor should he the experiences Badass give to him are not the sort that would make him a new man. Its a good performance that serves its purpose, it is also a limited one though just by the nature of it, and just like Jack Gilford in Save the Tiger Quaid never takes a scene away from Jack Nicholson.

Oh I blew my predictions. :(