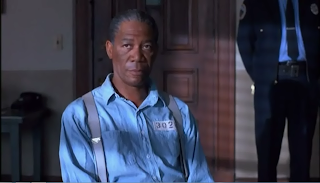 The Shawshank Redemption is strange in how popular it is in terms of the fact that it tops so many internet list as the #1 film, especially since this all came far after its initial release. I can easily see why it so liked by so many people, it a very effective film, with its universally inspiring themes, beautiful score and cinematography.

This is a very interesting nomination that any common sense nomination would think the lead nomination for the film would have gone to Tim Robbins in his portrayal as the wrongly convicted Andy Dufresne who is the actual lead of the film. It is not uncommon for the less screen time secondary lead or possibly supporting to get a nomination though, and Freeman I would say boarders on between lead and supporting. Although he does have less screen time in the film he most likely has more lines since Red is the narrator.

Freeman's narration is something one can easily take for granted, but really who can do a narration as well as him. Few, if anyone. Freeman's voice is most certainly one of his greatest assets and he uses it especially well with his narration. Now I say this because Freeman actually I feel handles his narration better than merely reading a description. He really does utilize it to make his narration an emotional guide through this tale. I feel he also not turn it into simply an ambiguous narrator, but this is in fact Red as a person telling his story to the audience.

Freeman's performance for most of the film is indeed supporting as Red a long serving prisoner of Shawshank who knows how to procure contraband items. He is very much reactive to what Andy is doing in the prison. This makes sense for his character who is very much use to the regulated life of prison, he therefore becomes interested and surprised of what Andy does. Freeman despite being secondary in many ways manages not to really be forgotten, and not only because of his narration. Freeman has a strong presence in this film, and never is lost in the crowds, even when very much in the background. When he is given more focus though Freeman dominates the screen with his unique and powerful screen presence.

Freeman performance I almost am glad is not overwhelming, but properly minimalistic. Freeman creates Red into a likable sympathetic man. Freeman in his reactions to what he sees is completely realistic, and when ever he has the chance he is truly emotionally resonate. I think his strongest scenes in terms of his more supporting work are Red's conversations with Andy about life. These a striking very poignant scenes, and a lot of credit for this should go to Freeman. He is interesting in that Red is doubtful of some of what Andy says, but Freeman always suggests that Red always still sees truth in his words about freedom needed for a man for a man really to live. Both actors in these scenes create truly beautiful moments between these two men, and this is because both men underplay the conversations they never enforce the poignancy that comes it just becomes realized through the truthful authenticity of their performances.

Freeman is given moments of lead, particularly at the end of the film where he does indeed become the lead and the focus of the movie. Freeman is given a short odyssey with Red at the end of the film. A short one, but a very striking one. It begins with his last parole hearing, where Freeman has an outstanding scene where he honestly shows a man reflect on his past, and wrongs in a sad and complex manner. The film than follows his life outside of prison. When the film becomes about Red, Freeman  makes the most of it. He final scenes as he struggles in fear on the outside, showing a lost man in a world he has lost his understanding of in a spectacular fashion. What is even greater is his final scenes as his enthusiasm grows to finding his friend and his want for life and freedom once more, completing his journey as a man. An incredibly strong performance that I must admit I grew myself liking more and more as I thought about it and I wrote this review.

Hmmm never really liked this one either.

He's great, I think though I really don't get the fuss about the movie.

I certianly like the movie, but I too do not quite understand how well liked it is.

Best movie ever? No. But a very good one to be sure. I also think that Freeman, while not having as much screen time, makes the most of his character in truly subtle ways, a very good performance, I think.