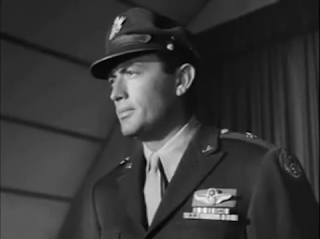 Twelve O'Clock High tells the story of World War II bomber pilots, and it was one of the first Hollywood films to show the psychological trauma of war.

Frank Savage is the man who is put in charge of the 918th heavy bombardment group, because there former commanding officer according to Savage became over identifying with his men. Savage really is not an overly complicated character actually, just a man put in charge of a job, and determined to do so to its fullest. Savage is a commanding man who will get these men into shape, even if it means being quite rough at times.

Peck really is fine for this role and has the right commanding presence as Savage. He has the right demeanor in the role which suits the character of Savage. Savage although must be shown to be a fine leader, is not really shown to be all more than that until the end of the film. Savage says what needs to be done and expects everyone to do it. Savage I suppose grows in respect with his men, which again Peck does not really change in his performance, nor did he have to, but rather the film dictates this growth in respect.

Peck really is not one of my favorite actors. I find he can many times be incredibly dull, and far too unemotional. He is slightly dull, and not particularly emotional in this performance, but that actually works well for Savage as a character. Peck always straight delivery and method works for Savage, even though that does mean neither his character or his performance is ever all that compelling. Still though his performance is fine and does work in context of the film. Also at the end Savage suffers a nervous breakdown. I did not think Peck really indicated or lead to the breakdown all that well, but his performance of the actual breakdown is fine. Overall not a very interesting performance, but one that does serve its purpose.