Best Actor 1962: Gregory Peck in To Kill A Mockingbird

Gregory Peck won an Oscar from his fifth and final Oscar nomination for portraying Atticus Finch in To Kill a Mockingbird. 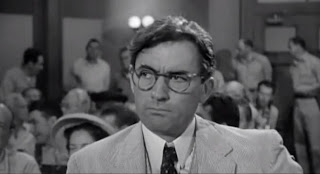 To Kill A Mockingbird is a very effective drama film with an interesting story, and a incredible sense of place.

Atticus Finch is a character who is fairly simple yet for some reason terrific. He is one of the most upstanding characters, yet he does not seem one dimensional because of this, instead that just seems to be right for Atticus. Gregory Peck creates Atticus incredibly well just from the initial conception of the character he is perfectly developed. Everything physically about Peck in this performance just seems right and completely honest for Atticus. His posture and his demeanor just absolutely brilliant, he just is completely the character he never seems not to be Atticus, he is always the perfect honest southern lawyer. He just absolutely fits the part, everything he does adds to his portrayal and he makes it seem like no one else could be Atticus besides Peck.

Peck excels in every single scene he is in,  I particularly like how warm of a performance he gives. He really seems like the perfect father to the children, and Peck does this with the utmost grace and simplicity. He never seems to be trying to be the perfect father, the words of wisdom and discipline that come with Atticus always are absolutely natural from Peck. He tells his stories and comforts the children so naturally, that Peck is Finch in this role there is no question of that. He always adds the right amount of heart to every moment of speeches to the children. He never makes the scenes sappy or corny, but rather effective moments of the true unconditional love a father has for his children. Scout says that Atticus always said things in the right way and this is completely true because Peck always says everything in the right way a truly heart warming performance that earns every second of warmth it creates.

Peck most famous and most powerful scene does come during the trial of Tom Robinson. Peck first of all controls and stands out in the trial scene. He throughout it shows Atticus' brilliance in the courtroom, showing his knowledge and control of his situation. His best moment of the scene comes in the summation to the jury near the end of the trial. Peck in this final summation is simply magnificent. His performance at the end here always consistently gives me chills because he is so good. He stands on the screen for nine minutes, not a single second could I stop watching him. He is just incredible putting all truest passion, and power into the scene. His honest urging for the jury to find Robinson innocent is one of the most powerful speeches in film history, and that is due to Peck's pitch perfect performance. Overall Atticus is not in the film that much in fact one could possibly try to argue he is supporting but that matters not Peck is wonderful in this performance and makes the most of every second he has. This is the type of performance that seemed to be destined for Peck, and Peck met his destiny completely.

This is a very moving, brilliant performanc in a beautiful movie.

Yes, he was really fantastic. I think you will give O'Toole 5 points, too, which will make this a very strong year.