Seymour Cassel received his only Oscar nomination for portraying Chet in Faces. 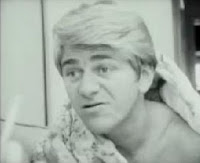 Faces is certainly an interesting film, although I found the part of the film focusing on Lynn Carlin was far more interesting than when she is not on screen.

Luckily for Cassel he is only on the screen in scenes with Carlin. Cassel's Chet meets Carlin's Maria as she goes out with her friends to a bar, after she was left by her husband (John Marley). Cassel performance as with almost all of the other performers in the film is incredibly realistic. With Cassel here there is no obvious "acting" to be seen despite the fact that his character is one of the least just normal performance. There is never a hint of falseness with his performance which is needed which allows him to work very well with Carlin's performance which is as truly honest as a performance really can be.

Chet is a young hippie who goes home with Maria and her friends where they talk about various things at
at her home. Cassel is really great here as Chet always completely truthful in his performance, and always adding as much to his performance as possibly. His external delivery is already spot on perfect but Cassel shows much internally with his eyes that is just wonderful. As Chet speaks to the women, than later to just Maria, you really learn about him, no such much because of the dialogue, although that is part of it but more so because of how much effort Cassel honestly puts in to the role and adds to it. He shows so much of Chet in such a short time that it really is pretty amazing. All of his scenes are great even if they are brief. His especially strong scene is his last scene with Carlin. Both actors just create such a truthful, and honest scene together, their efforts make their final scene one I shall remember for awhile. A very strong performance, a performance of simplicity, and realism at some of its finest.

I think it's a fantastic performance that benefits from Lynn Carlin.

I espeically love how he leaves the film (I won't spoil it for those who haven't seen it) ;)

Was the film an exhausting one? I ask because A Woman Under The Influence was.

No not really. It is played for realism, but it is never that heavy. It is not a light film but I was not at all exhausted by it.